Since there's nothing that Isles fans like more than talking about Rick DiPietro, I figured I'd write this dissertation on Rick's infamous contract. I think there's some chance that I might have something almost kinda sorta original to say about it.

Rick's story is sad, for him, the team, the fans, Charles Wang, pretty much everyone involved. Clearly, injuries prevented Rick from ever justifying his massive contract. But there's a popular strain of thought that goes something like, "If Rick had just stayed healthy, that deal would've made Wang look like a genius!" Unfortunately, that's not the case. The contract was terrible, under any realistic set of circumstances, and and I believe that I can prove that it was terrible, empirically and incontrovertibly.

Rick's deal was for an even $4.5 million per year for 15 years. That means that the total value of his contract by the finish was $67.5 million.

To me, this chart is proof by itself that Rick was never going to justify the contract, period, end of story: 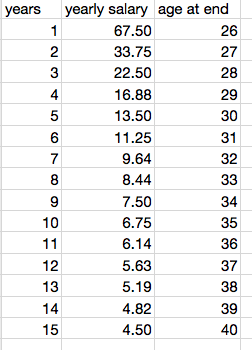 In case it's unclear, column 1 represents how many years Rick would've been the Isles' starting goalie. Column 2 is the total value of his contract divided by that many years, and column 3 shows his age at the end of that particular season.

Nobody could've realistically expected Rick to be a starting goalie, let alone a top starting goalie, for 15 straight years. At some point, injuries or time would break his body down (impossible!), or his play would deteriorate, or we'd see a Luongo/Schneider situation where a younger, cheaper goalie outplays him even though he's still good enough to start in the NHL. Given that it was unrealistic to expect him to be The Man for every single year of the contract, his yearly salary of $4.5 million is misleading. It doesn't account for the rest of the contract, when Rick would be paid to sit on the bench or sit at home. We need to measure the total value of the contract against the number of years that he actually did earn it. That's what the chart does. It gives us the effective yearly salary depending on how many years of service Rick was able to render as our staring goalie.

In reality, Rick was only able to start for two seasons before injuries left him unable to keep up with the NHL game. But nobody could've predicted that. It would be more realistic to say that Rick would be an NHL starter for somewhere between half the deal and the whole thing.

For 7 years or less of good service, the contract is comically bad. If Rick were "only" able to be the team's best goalie for 7 years, we'd have paid him more per year than Ovechkin and Stamkos will earn this coming season.

If Rick earned his deal for 8 years and then faded away, he'd receive $8.44 million/year. That's much higher than any NHL goalie is paid now. Next year, Rinne and Quick get the most, at $7 million each.

If Rick earned his deal for 10 years, he'd receive $6.75 million/year, slightly less than the highest paid goalies will get next year.

If Rick earned his deal for 12 years, he'd receive $5.63 million/year. That falls around 9th in goalie salaries for next year.

What would it take for Rick to truly earn his contract?

For 10 seasons, his pay is slightly below what those top goalies have received in their latest contracts. So, he'd need to again be the best goalie in the league, or at least in that conversation, EVERY SINGLE ONE of those 10 seasons to justify his contract.

For 12 seasons, his $5.63 million salary is looking better. But even then, based on next season's contracts, he'd be making what fewer than 10 goalies are making. He would need to be a top 10 goalie for each one of those years. We can grant some leeway here and say that he could also average out to top 10: some elite years, some pedestrian years, and some years where he's right around that #10 mark.

Thinking of the contract in these terms puts the issue into stark relief. It's crazy to expect Rick to have been a top 3 goalie every single year for 8-10 years. That's impossible. It's likewise unreasonable to expect him to be top 10, consistently, over a TWELVE YEAR stretch. Just crazy.

But in case you're still not buying it because you think Rick that damn good, let's look at the numbers.

How justified were we in thinking he could be that good?

For the sake of simplicity, we'll just use even strength save percentage, the hip stat that's all the rage with "the kids." It isn't perfect, especially not by itself, but it gives a pretty clear picture of goalie performance from year to year.

Since it's not fair to compare Rick, a starter, to goaltenders who performed well for only a few games, I'll use 40 games played as an arbitrary cutoff. This should let us, more or less, compare the 30 starters.

Rick had three years that were "good," so we'll look only at those.

2005-06 Even Strength Save Percentage

This is the year right before Rick received the contract. He finished 29th overall, but he was 17th among starters, slightly below average.

2006-07 Even Strength Save Percentage

Rick finished 9th overall and THIRD among starters, an absolutely fantastic year. He came out flying and looked like he might just end up justifying this contract. He was a big part of a team that might've been able to do some damage.

2007-08 Even Strength Save Percentage

Rick finished 56th overall and 29th among starters. Honestly, this surprised me. I remembered Rick playing much better this year, the one where he was named to the All Star team. It's possible that his numbers suffered down the stretch as the team fell out of contention and he wrestled with hip and knee problems. Either way, clearly below average for a starter even if you want to give him some sort of subjective boost.

For a comparison, let's look at Nabby's two years with the Isles:

2011-12 Even Strength Save Percentage

Nabby finished 49th overall and 23rd among starters. Below average, but not the worst.

2013 Even Strength Save Percentage

Nabby finished 44th, but 20th among starters (counting goalies with 24 games or more, pro-rated from 40), below average again.

Rick's three good years averaged out to 16th among starters (technically, 16.333rd). Nabby's two years with the team averaged out to 21st (or 22nd if you want to round down).

The numbers don't give us much hope that Rick would earn his deal. He had one great year, but in every other year, including the one that "earned" him the 15 year contract, he was below average. On average, he was only five spots better than a guy available on waivers.

Going back to what it would take to justify the contract, I think we can dismiss any chance that Rick would've been perennially among the elite of the position. He probably showed us his ceiling in 06-07; it's possible that alternate universe Rick would improve his consistency and put up a few such years in a row, but that's speculative, and it's probably about as likely that his dominance in that one year was a fluke. Alternating some elite years, some pedestrian years (like the other two years in our data set), along with some average and slightly-above-average years seems like a pretty safe bet.

If we want to put on Isles colored glasses, an optimistic-but-within-the-realm-of-possibility scenario, based on these numbers, sees Rick hover around the 5th-10th range. If that's true, he would've needed to play for 11 or more years to earn his contract. But remember, that's the Isles colored glasses projection; this hypothetical Rick is outperforming the data we actually have. So to justify the deal, he'd need to have played better for 11 consecutive seasons than he had in the three actual seasons when he was mostly healthy.

What was the bet the Isles were making with this contract? Essentially, they were betting that they would end up in one of the happy columns of the chart. They were betting that Rick would play for some number of years, and that the total number of years he played, divided into $67.5 million, would be a worthwhile investment for the team. But that was always a foolish bet. The total amount of money they gave him made it impossible for him to ever justify the deal.

The Isles were also betting that there's no way that something like what actually ended up happening would happen. I'm not going to spend too much time on this because it's been discussed to death, but look at how ugly the first few years of the chart are. (Try not to think too long about how line 2 of the chart is pretty much what happened in reality, missing only the buyout discount.) Was injury trouble so unlikely that the team should've risked getting stuck on those unhappy years of the chart, paying a guy who can't play anymore? Were Rick's skills worth $16.8 million/year if he could only play for 4 years? Was it so impossible that a young goalie would emerge and take the job away? Or that his talent just wasn't what they had thought?

Even if you accept all the premises underlying the deal, there's no justification for the 15 year term. The team could've accomplished the same things they were after by going less crazy. Rick, coming off his 05-06 season, would've jumped at an offer 10 years each at $4.5 million. Or, hell, at 8 years each at $3.5 million, something similar to the contract Hamonic just signed. Looking at the chart, if they expected 10 years of productivity from Rick, they could've offered him $6 million/year, which his performance wouldn't have come close to justifying to that point...but it would STILL represent $750k in SAVINGS, every year, compared to what his actual contract would've paid out for 10 productive years.

If you wouldn't have been willing to sign the contracts represented by lines 8-12 of the chart, then the deal was just bad.

The notion that salaries would inflate over time is sometimes brought up to justify the contract. It wasn't clear what would happen to salaries, the argument goes, and there were some big contracts going out at that point. The team was worried that elite goaltenders would command $8+ million/year. Signing Rick for a longer term at a lower yearly salary was a hedge against salaries' spiraling out of control. I have two responses.

First, that doesn't really refute "the chart." My argument thus far has been that the team agreed to pay an inflated salary anyway, unless Rick remained the team's best goalie for 10+ years. If they were worried that goalies were going to make $8-9 million, well, they effectively agreed to pay him that sort of salary unless he remained the starter for 9 straight seasons. Only after finishing year 9 would the Isles have saved money against their hypothetical scary worst case scenario future.

Second, inflation evens out. Based on his performance (17th among starters in 05-06, the year before he signed), he was overpaid to start the deal. If he both improved (which he did) and goaltender salaries inflated (which they didn't so much, but that's more the other argument), he'd be overpaid before contracts inflated and underpaid after. It would work out roughly the same as just paying him market value in each individual year; there was no savings.

Another objection is that the $4.5 million contract is cap friendly. it's true that it's a fine number for a starter, even after he slides down from above average to average or worse. But as almost impossible that he'd be starting for all 15 years, for every year after he was not longer good enough to start, we'd be stuck with a $4.5 million cap hit for our backup.