In order to properly prepare them for life in the NHL, draft prospects must learn how to avoid the dangers of NBC hockey analyst Pierre McGuire.

NEWARK, N.J. (Lighthouse Press) _ A new program, utilized for the first time at this year's NHL draft, has been designed to teach NHL prospects how to properly avoid danger when confronted by NBC hockey analyst Pierre McGuire.

The program, entitled, "HEY E.D.S.O! Four Steps to Pierre McGuire Safety," is mandatory for all players eligible for this Sunday's draft, which is being held at New Jersey's Prudential Center. The seminar lasts an hour, but contains all the information young players need to know before they have to face McGuire in a live situation.

"We feel it's important for the prospects to be calm when facing Pierre in an interview," said NHL deputy commissioner Bill Daly. "This program gives them tips and instructions for what to do when asked bizarre and benign questions in a loud, uncomfortable setting by an incredibly creepy man."

The four steps are designed to help players finish interviews with McGuire as quickly and easily as possible. While not every interaction with McGuire is dangerous, Daly says young players must understand the risks and, above all, not panic.

The method is abbreviated as E.D.S.O, which stands for Eye-Contact, Distance, Speak-Up and Open Areas.

Step one is to avoid direct eye contact with McGuire. As long as you're not looking at him, he'll keep the questions focused on the game. Step two is keep at least one person's distance between yourself and McGuire at all times during the interview. Only lean in to get closer to the microphone.

Next is to tell an adult when you're going to talk to McGuire. Find a teammate, coach, trainer, clergyman or member of your team's PR staff and let them know about the interview. If possible, bring them with you. Finally, stay in an open area on the ice for the interview and do not let McGuire corner you in an enclosed hallway or locker room.

Players are taught other tips as well, such as never accept candy from McGuire, who is known to carry Werther's Originals in his jacket pocket.

McGuire's presence on NBC NHL broadcasts has grown larger since he first joined the network in 2011. His tidbits of intimate personal information on every player in the league are persistent throughout every game, and physical descriptions such as "a big body presence," "a long wingspan," "big, powerful legs" and "an active stick that's extra long and hard as an oak tree" seem to be designed to produce the maximum amount of out-of-context unpleasantness in viewers.

"Pierre can be anywhere in the rink at anytime. It's important for these youngsters to be ready," said Daly. "Unfortunately, we can't stop him from telling players he loves their smiles or to just go have fun out there. But by using the E.D.S.O. method, incoming players will be prepared for such an emergency the very first time they come into contact with Pierre."

Upon completion, players are given a foldable wallet card to remind them of the E.D.S.O. principles (embedded below).

The class is taught by former NHL defenseman Mike Commodore. 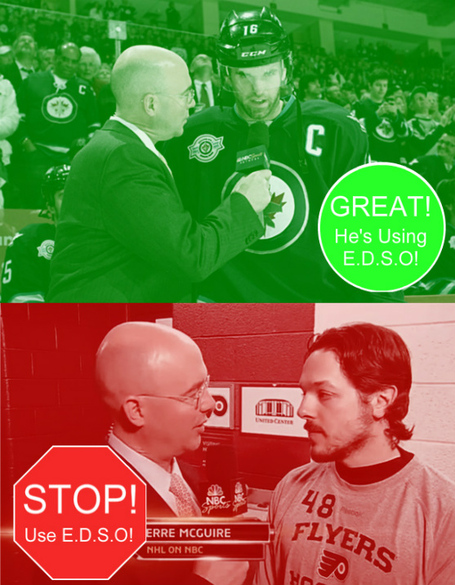 More on the NHL

This is a satire. I'm sure Pierre isn't really a MONSTER. He just plays one on TV.