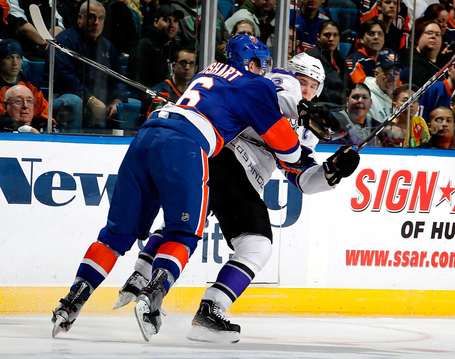 When the Islanders pick 15th in the first round of the coming Sunday's NHL Draft (barring a trade, of course), it will represent the first time the Islanders will have a first round pick outside of the top 10 since 2005. What kind of player is it reasonable for fans to expect at number 15? While "first round pick" is often a pedigree -- or a burden -- that places high expectation on 18 year old kids, in fact players picked in the mid- or late- first round are usually in a tier of talent decidedly lower than the those picked at the very top of the draft. Last draft season, I put up a series of posts assessing the performance of draft picks at various points of the draft. This season, I thought it would be useful to re-purpose that review to determine the performance of players picked within the range of No. 15.

Here are the the players taken between no. 12 and 18 in the 2003-2008 Entry Drafts. Next to each player, there is a rating of 1-4. 1 represents an elite-caliber player, 2 is an NHL player with high-end but not elite talent (e.g., one you would expect to play on a team's top two forward or defense lines), 3 is an NHL regular and 4 is a bust. TBD is for players who aren't busts but simply haven't yet played enough at the NHL level.

Feel free to quibble with my rankings in comments (I struggled with Grabner, McDonagh, Staal and a few others), but the above should give a general sense of the range of players that have been picked in the mid-teens in the recent past. As you can, some draft years have been horrible in the this range (2005), while some have been better. The breakdown of 42 picks is as follows:

While most players picked in this range have become everyday NHL players, the likelhood of such a player being an Ian Cole or an Eric Fehr is a lot more likely than a Ryan McDonagh or Erik Karlsson. Of course, past performance is no indication of future results, especially when it comes to things as variable as the depth hockey talent amongst 18 year old boys in a given year. And the current thinking is that this draft is deeper than prior years. But even the legendary 2003 draft has the likes of Hugh Jessiman and Robert Nilsson go in the middle of the first round.