The Barclays Center CEO teases another new way to re-brand the Islanders before their move to Brooklyn: games broadcast in black and white.

LUCERNE, Switzerland (LHP) _ In an interview with a Swiss news outlet, Barclays Center and Brooklyn Nets CEO Brett Yormark revealed more of his future marketing plans for the New York Islanders, including broadcasting the team's games in black and white.

"The colors of Brooklyn are black and white, and the absolute best way to watch Brooklyn's teams on television is in those colors," Yormark told Swiss chat show host Ned Nederlander. "Experiencing the games in black and white will unite established fans and new fans in a very special and uniquely Brooklyn way. It's very exciting."

Yormark presented a test video and some advertising (embedded below) that were previously only disclosed to focus groups to demonstrate how Islanders games would look in the new format he called, "Yormark-Vision."

The Islanders could become the first professional sports team to have all of its games broadcast in black and white since 1966, the year all three broadcast networks began airing their full prime-time schedules in color. Yormark said he believes having games aired without color will increase viewers' enjoyment while branding the Islanders with a new, more marketable identity.

"The Honeymooners, The Patty Duke Show, both broadcast in black and white, and both are unmistakably Brooklyn," Yormark told Nederlander. "We want fans to identify with [Islanders coach] Jack Capuano the way viewers identified with Ralph Kramden over 60 years ago."

Yormark has been hinting for months at possibly adding black and white elements to the Islanders' color scheme in order to bring them closer in style to the Nets when the two teams start sharing the Barclays Center in 2015. Brooklyn's stark two-color uniforms have been a hit with NBA fans since the Nets started wearing them this season.

But the idea of altering the Islanders traditional blue-and-orange uniforms has been a tough sell for the team's fan base, one that's gun-shy about messing with what they feel is perfection. The team's current black third jerseys have received mixed-to-negative reviews.

"Our research is in its early stages, and no decisions have been made yet," Yormark said. "But we feel that once the loyal and very passionate Islanders fans get a look at our test footage and advertising campaign, they'll fall in love with the idea of seeing games broadcast in beautiful, clean black and white."

Yormark said negotiations with Cablevision, the Islanders' cable partner, had not yet commenced but that he expected little to no resistance from CEO James Dolan on the switch to black and white broadcasts.

"Islanders broadcasts are routinely pushed to the outer fringes of Cablevision's menu of MSG+3000 properties," Yormark said. "So we think broadcasting in black and white will be a natural, comfortable extension of the brand for older fans." 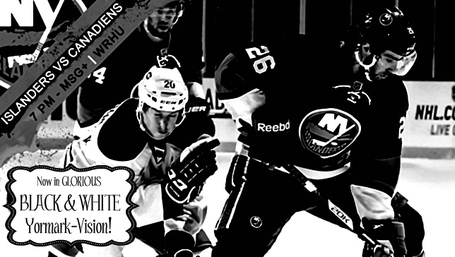 This is a satire. It is not real. If you can't be bothered to read this far to see this note, you deserve to be fooled, Fool.

But seriously, keep it blue and orange, Brett.