Islanders vs. Penguins G2 Bits: Game wasn't as close as the score

Reactions from here, there and everywhere as the Islanders have tied the series at 1-1.

Share All sharing options for: Islanders vs. Penguins G2 Bits: Game wasn't as close as the score

You know what I forgot about the playoffs as a fan? How the storylines and results from each game invade your head in the intervening hours and days between games.

I have a Saturday morning pick-up game with the same group of guys who have played together for 10-20 years, and last night's Islanders performance was the dominant topic today. Playoffs.

Lots more coverage of Game 2 below, and a few things starting to trickle in as advance for Game 3, which -- don't forget -- is a noon start on Sunday. I've noticed in print and on air how many observers thought "the Islanders were outplaying them, even when the score was 3-1." So it will be interesting to see how teams adjust Sunday.

We had some video reactions in the morning thread, and the Islanders official site has several more via MSG here.

You ready for Sunday?

Nassau Coliseum all towel'd up ahead of Game 3 tomorrow - twitter.com/Sean_Leahy/sta…

By the way, from that first Gazette link, your captain John Tavares, on Okposo fighting:

"Kyle just stepped up at a good time. As a teammate, any time you see someone sacrifice like that this time of the year, it goes a long way."

And do you want cupcakes? Here: 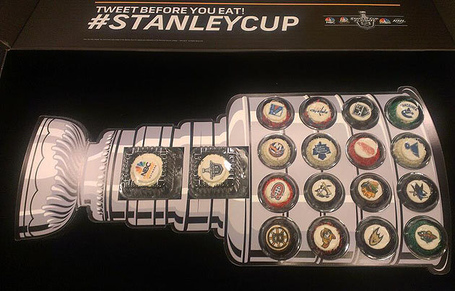 The NHL and NBC Sports have partnered with Crumbs Bake Shop to celebrate the 2013 Stanley Cup Playoffs. Crumbs has created cupcakes featuring all 16 of this year's playoff clubs, including the Islanders!
The Stanley Cup(cakes) will be available at Crumbs locations across the country, including all three Long Island and NYC locations in Greenvale, Huntington, and Woodbury.

Note: Go ahead and use this as Saturday's general playoff watching discussion thread too.