Now that the regular season is over, before Game 1 I'd like to quickly recap the Islanders' season. I don't have time for an in-depth overall post of every player on the team, but I do want to quickly touch on the Islanders' possession numbers and their neutral zone play.

As you should know from my previous posts, I've been tracking zone entries for the Islanders this year. If you don't know what zone entries are, I'd encourage you to read my intro post about them, but if you'd rather not for some reason, I'll explain quickly here:

So how'd the Islanders do overall? First let's look at the individual Isles: 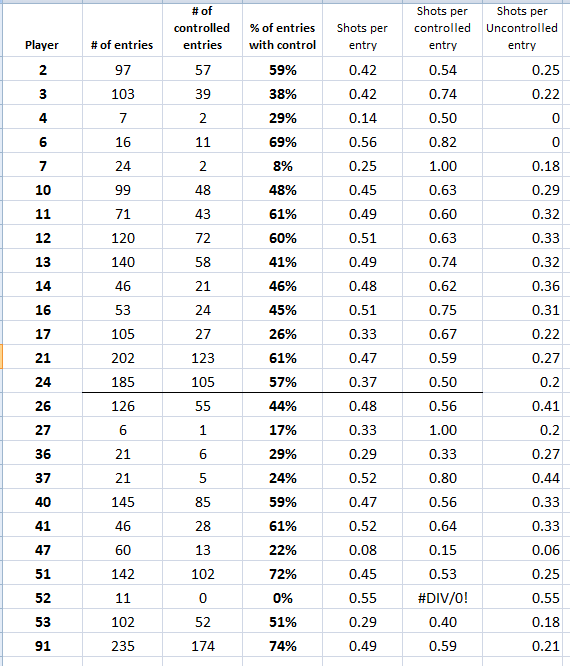 I posted this graphic in the Bits post, but mistakenly left out Radek Martinek, and that has been fixed. Anyhow the results Identify each player by #, so 91 is Tavares, 51 is Nielsen and so on.

1. John Tavares and Frans Nielsen are gods at the offensive aspects of the neutral zone. Having over 70% of your entries be by carry or pass instead of dump/tip-ins is elite (only 1 Philly player, Jagr, did it last year), and both of them managed it. Meanwhile, JT did this despite leading the team in entries - he got the best type of entries in bulk.

2. More on NOB: That whole line has been freaking dominant in the neutral zone. Kyle Okposo started really slow in the neutral zone, but he and Bailey have kicked it up a notch with the carry-ins, both at over 60% in the entry with possession rate. And like Tavares, Okposo is doing it in bulk, he's got the 2nd most entries on the team.

3. Note how good the D are at puck moving: Defensemen generally get a greater % of their entries with possession via pass than carry, but for the most part our D are excellent at neutral zone entries. Both Streit and Lubo were elite at this, at around 60% of entries with possession with both making a good # of entries. Hamonic and Hickey are at a very good 40% (46% for Hickey! 38% for Hamonic).

For comparison's sake, through 15 games this year, the Kings - an elite possession team - had only 1 D above 40% possession (Doughty of course) and only one above 22%. The Isles have 4. AMac and Strait both have okay entry with possession rates around 20-25%. Finley, Carkner, and Martinek have small sample sizes, but none of these guys are good at entry with the puck, which made the Finley-Carkner D pairing a black hole that should never have been put together.

4. More on Finley-Carkner: Yes as they're limited you don't want them carrying the puck in more, but the problem is that they essentially make the forwards have to do all the work themselves. This is kind of difficult, and it's not like these guys are particularly good at the defensive end either. Carkner can work with Streit, but the fact that those two were once paired together is abysmal.

5. You might've noticed AMac's shots per entry is insanely low. This is a sample size fluke. The current findings in this new field of study suggest that the amount of shots per entry type doesn't vary between players (this is a counter intuitive finding i know, but just run with it for now). Thus the different shots per entry figures for each player are for the most part random. You can see that with the forwards - Colin McDonald entries net substantially more shots per entry with possession than Tavares, which of course can't be right. These are just sample size flukes, pay little attention to it.

NOW you may have noticed the above numbers are missing a key component - we have Islander individual player entries but not opposing entries while those guys are on the ice. In past years - well last year really - we could use a tool on timeonice.com to get Entry +/-, to get essentially a measure of how good the team was playing in the neutral zone (offensively and defensively) while players were on the ice. But alas, that tool is not working for this season, so we don't have that for individual players.

We DO however have the overall entry +/- of the team. The graph below essentially shows the Close-Situation performance of the team in the neutral zone over the course of the season. 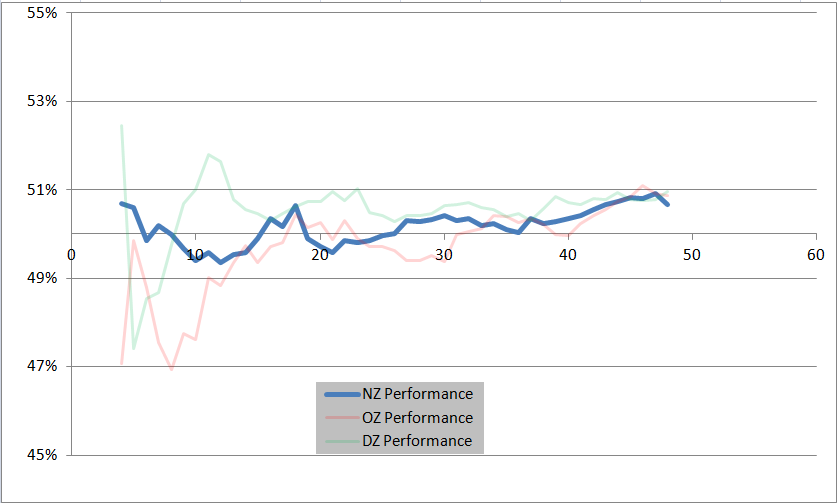 The number being tracked here by the blue line is called "Neutral Zone Fenwick Close." Essentially we're tracking the expected shot differential (counting missed shots) of the team based on the team's neutral zone play. 50% means that the team is playing exactly even with the opponent (50% of shots are by the team), while above 50% is good and below is poor. The Isles, as you can see by the blue line, finished at a very solid and certainly good 50.7%.

Note how these lines are more likely to move up and down than the neutral zone performance. This is likely because we think that the OZ and DZ performance #s aren't sustainable, but are very likely heavily influenced by randomness. This isn't clear mind you and bears further study, but still seems likely to be the result we find once we get further data this year.

Now the Isles good neutral zone performance, in combination with their good OZ and DZ performances - which may be due to luck and randomness more than skill, but it was positive for the team at end of the year - combined to give the Isles a Fenwick Close % of 52%. This 52% essentially represents how much the Isles controlled possession while the games were close during this season - 52% of the time. That's a terrific figure and a decent improvement over last year.

Some of this may not be sustainable - again the Neutral Zone performance was only 50.7% overall - but the team was clearly superior over its last stretch of games: The Isles were at 51.4% in the second half, and 52% over the final quarter of the season. This is a great sign for the playoffs and for next season.