Bridgeport conducts its season-end interviews, while the Islanders prepare to march on.

Share All sharing options for: New York Islanders Gameday Bits: Do not settle.

The Islanders have two games to go. Tonight and tomorrow. On the road, but that whole "ooooh, road, scary" thing hasn't mattered in 14 of their 22 games away from Nassau Coliseum thus far.

Meanwhile, though the playoff spot is clinched, there is still something to gain -- like ensuring the "Pass Go, Collect $200" 6th seed that ensures a first-round matchup against the Southeast Division "champion" Washington Capitals. Sure, the Caps are hot, but as far as road matchups go that one wouldn't be too shabby. Torgo has outlined the seeding scenarios for you.

Anyway, that's getting ahead of ourselves. Game tonight. We'll have some Flyers humor a little later, followed by a proper game preview in the afternoon to get us warmed up. For now, some links:

So I guess junior playoff series really shouldn't end this way, but then teenagers:

Leave your First Islanders Goal picks for tonight's game in this thread. We are down to the wire. The top of the leaderboard:

Finally: Boy, we virtually partied the other night when the Isles clinched. Turns out, so did official Lighthouse Dog #2. She was a bit hung over in the morning: 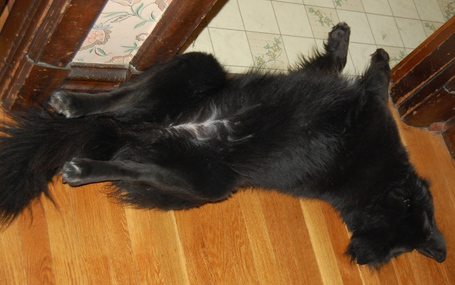