ESPN 30-for-30 documentary on John Spano's wild ride as Islanders owner is about more than just one crazy year.

Share All sharing options for: 'Big Shot' Brings Islanders Love and Infamy into Your Living Room

Note: This review was written after Big Shot's premiere screening at the 2013 Tribeca Film Festival. The film makes its television debut on Oct. 22 at 8 p.m. on ESPN.

Passion is the prevailing characteristic of Big Shot, the ESPN 30-for-30 documentary about one-time Islanders almost-owner John Spano. It's evident in the way actor Kevin Connolly, the film's director and a lifelong Islanders fan, infuses his first documentary with vintage bits of video and moments that will be catnip to fellow fans. It's in the way the reporters, lawyers, former Islanders and even Mike Milbury take obvious delight in telling these surreal and often hilarious stories for the one millionth time, this time to Connolly's camera.

Even Spano himself, finally cornered by Connolly after much cajoling, seems to enjoy getting these things off his chest. He smirks and jokes throughout the film about almost defrauding the NHL out of a team and several banks out of a lot of money.

Spano attempted to buy the Islanders in 1996 and - spoiler alert - he had no money. He used false documents, a jet-setting outward appearance and lies to keep his plan afloat until he made one move too many and ran out of time. Every inch of Spano's timeline is covered in Big Shot, although the majority of the information in the film won't be news to anyone that's read the multiple books, magazine and other summaries of that tumultuous period.

But seeing and hearing the stories told by the principal players of the time gives the tale a life and an effervescence that you can't get from a book. The interviews bring into sharper focus Spano's various personality quirks, the legal and financial goose chase he sent everyone on and just how close he came to pulling the whole thing off.

The film is fast-paced and very funny, the type of snarky, sarcastic humor that's well-practiced already by most Long Islanders. The combination of thoroughness, humor and adoration is a remarkable achievement, especially considering the long cast of characters needed to tell the full story. And the result is a movie about a single, interesting event in a team's history that is also reverent to the entirety of the franchise.

Big Shot's first act sets up the Islanders' backstory, from expansion to dynasty to dismantling. Much time is spent on classic footage and photos, some of Connolly himself, that paint a picture of the Islanders' proud place in the community during the 70's and 80's. The memories aren't just filler; they go a long way to showing how Spano was able to take advantage of and fool everyone around the team by promising a return to the glory days when the Islanders were your next door neighbors that just also happened to be the best hockey team on Earth.

Once Spano enters the picture, we follow the bizarre twists and turns of his plan to buy an NHL team despite not having any scratch. For a guy who went to jail not once but twice for fraud, Spano doesn't come off as being very rehabilitated. He credits an unwavering belief in himself for his pursuit of the impossible, and blames faulty "risk assessment" for its downfall, much to the on-camera surprise of Connolly. Wistful tales of sleepless lights and constant tightrope walking do little to make him a sympathetic figure, but his recounting of how the internet's Mesozoic Era made it easy to keep creditors off balance and helped him get an $80 million loan from a major bank is almost charming.

The only time Spano appears remorseful is when he talks of the effects of his deception on his parents and the disruption of their lives.

Milbury: Incredibly, a Star in This Saga

In a description no one ever thought possible, Milbury's role in Big Shot is akin to Heath Ledger's Joker in The Dark Knight: neither is on-screen much, but when they are, you're riveted to what they're going to say next. From his admission that the Islanders at the time "sucked" and that "he wouldn't have paid to watch them," to his disagreement with Spano on the decision to step down from coaching, to the pure nightmare fuel of a proposed tryst in the Garden City Hotel with Spano and a pair of ladyfriends, Milbury is the film's star.

Normally, a guy with a promising new boss who turned out to be a fraud might illicit a degree of empathy. But that's hard to do when Milbury doesn't deviate at all from the bullheaded blowhard he plays on NBC Sports Network.

The rest of the cast, including reporters like Alan Hahn, Peter Botte and John Valenti, former Islanders Bryan Berard, Clark Gillies and Bob Nystrom, an assortment of lawyers, team executives, fans and, of course, Stan Fischler, propel the story forward with humor and sincerity. Everyone contributes to the affectionate atmosphere, but without ever getting lost in the nostalgia. Hahn in particular comes off not as "that guy on the Knicks post-game show" and more like a fervent fan who also got a once-in-a-lifetime chance to cover a monumental moment for his favorite team's local paper.

The film's only speed bumps are in the few scattered dramatizations of key events. The vignettes have a certain true crime show vibe that's a little off-putting. While they break up the cycle of talking heads and newspaper headlines that make up the standard 30-for-30 format, they just seem out of place in a movie in which nearly all of the principals are already on camera.

Big Shot premieres on ESPN in October and should be required viewing for all Islanders fans. The central story isn't the most shining moment in team history, but the film is unquestionably a love letter to the team, its legacy and its loyal fanbase.

* * *
FURTHER READING:
And here's a snapshot from the premiere: 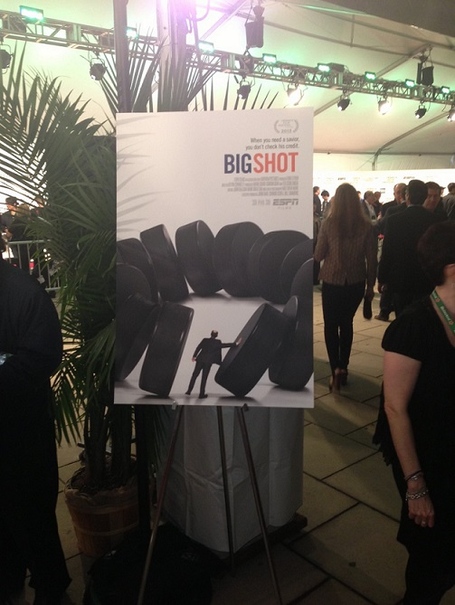