"Battle Level," Jack Capuano's frequent metric for measuring the Islanders' play, isn't just coachspeak. And Lighthouse Hockey has an insider's look at how it works.

Share All sharing options for: Zeitgeist: The Science Behind Jack Capuano's Battle Levels

After each game of this season, win or lose, Islanders coach Jack Capuano has a refrain so ubiquitous, so repetitive, so constant that it is practically a team motto.

"Battle Level" is always the coach's main concern. He compliments players when their Battle Level is high, and admonishes them when its low. A low Battle Level is almost always, according to Capuano, the key reason behind an Islanders loss.

But what sounds like cliched coachspeak is anything but. Thanks to an anonymous source inside the Islanders, Lighthouse Hockey has obtained the low-down on how Capuano's Battle Level metric is implemented and monitored on a game-by-game basis.

"Battle Level is very real," said the source. "Cappy believes very strongly in grading each player's Battle Level after every shift, game, week, month and season. He's got a chart that he follows and that he's given to each of the players.

"He expects them to eat, sleep and breathe his Battle Level chart at all times."

The lowest Battle Level is "Passenger," another of Capuano's frequently-used terms. Passengers are deemed to have little or no Battle Level and are often shunned by Capuano post-game.

"Cappy hates passengers," said the source. "One time, he thought Josh Bailey was a passenger in a game against Dallas. He refused to talk to Bailey for two full days, including an entire flight to Tampa in which he sat right next to Josh. Imagine, a four hour flight after a loss and the guy next to you just won't acknowledge you. That's Cappy."

Set above passenger on the Battle Level chart is the green, or "Unlucky" zone. If Capuano feels a player's Battle Level was mostly acceptable but that the player was a victim of rotten luck, he'll slot him here and give him a pass for the game.

Next up is the real heart of the system. The next two levels are labeled "Smart" and "Hard," which Capuano feels are the two attributes shared by the most productive hockey players. Capuano believes that the optimum way to play is with equal parts intelligence and resilience, and that the best Battle Level is right in between Smart and Hard - otherwise known as "The Cappy Zone."

"Cappy loves The Cappy Zone. It's his baby," said the source, who is not an assistant coach. "If you hit that Cappy Zone often, you're looking at a ton of ice time. Kyle Okposo is always in that group. He might not score a lot, but if Cappy thinks Okie's playing Smart and Hard, he might double shift him."

The highest and best Battle Level is the "Warrior" classification and is generally reserved for veteran defenseman and fourth line grinders who play a gritty, unpretentious game. Player don't necessarily need to be productive or responsible to be "Warriors." They just need to be old and able to stand on two skates.

"Cappy's warriors are easy to spot. They're the guys on the ice with two minutes to go down by a goal. Steve Staios, Milan Jurcina, Mark Eaton, Marty Reasoner. Nabokov, too, Cappy loves those guys. He'll play them until they keel over on the ice."

The source also provided us a hard copy of the Battle Level chart Capuano gives to players each year. A poster-size version hangs in the coach's office, trainers room, shower and laundry room.

"Cappy tracks the Battle Level of the locker room staff, too," said the source. "If he finds someone not washing the socks thoroughly enough, he'll tear that guy a new one."

Capuano's Battle Level plan hasn't been adopted by the rest of the NHL. Not yet anyway. But Capuano plans on changing that this summer.

A book detailing the system entitled, Battle Level: Lessons on Hockey, Weight Loss & Dating by Jack Capuano, is due in stores this August. 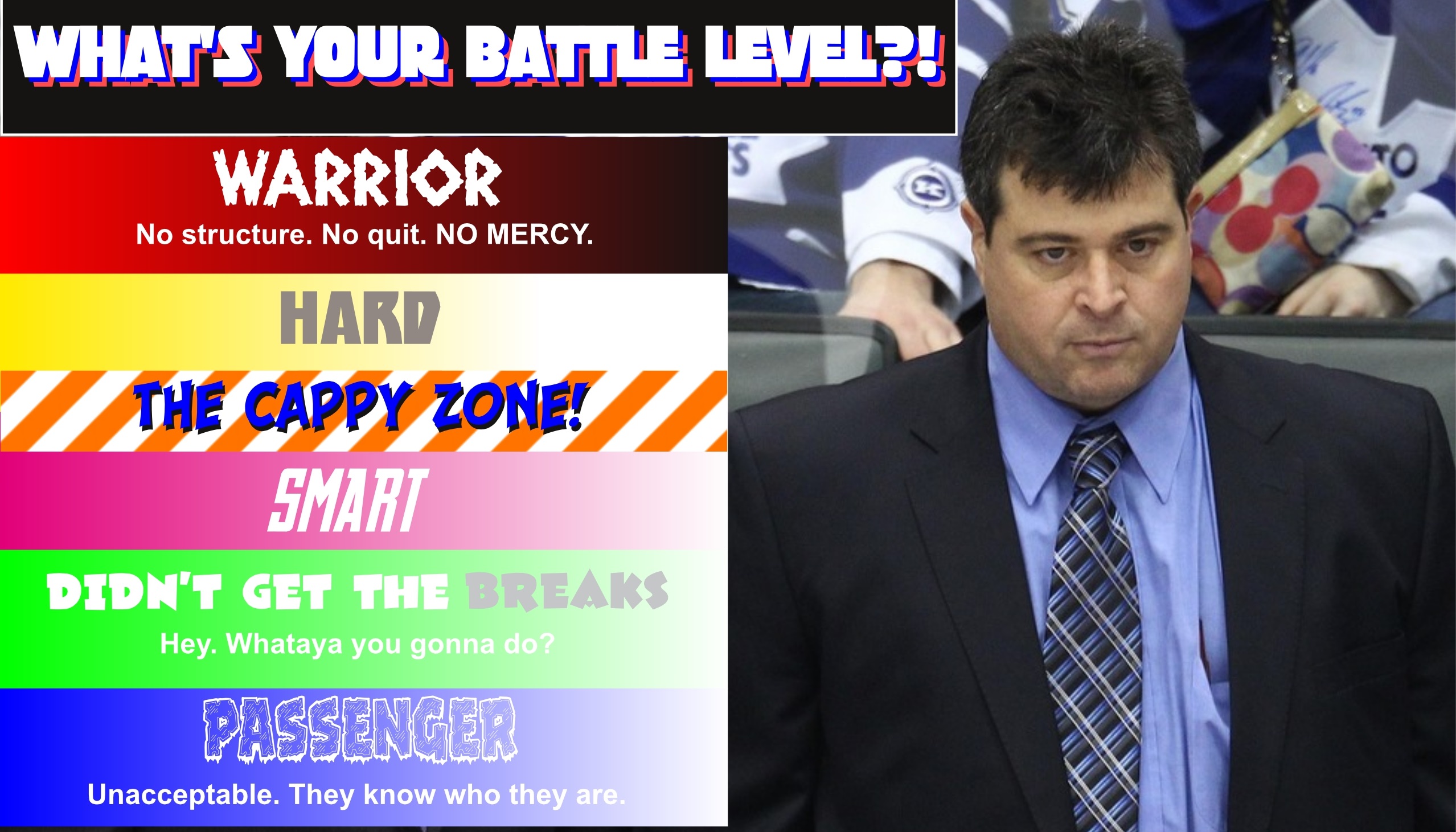 This is a parody. And my Photoshop Battle Level is clearly just a tiny bit above "Passenger."