"It's nothing personal, bro. We still like you. It's just that..." - USA TODAY Sports

This is going to be a three part series on a review of where the Isles are right now, with the parts focusing upon goaltending, defense, and forwards. We'll be looking at some advanced metrics, neutral zone play, and some traditional metric in our review, and the goal of this review is to see what the Isles have and should have going forward.

The Islanders are last in the league in Even Strength (EV) Goals Allowed. The question is who is to blame? Some would argue it's the defense. However, the #s argue strongly otherwise - while the D hasn't been great (see Part 2 coming up soon), it's the goaltending that's a major problem.

The average goaltender in the NHL has an Even Strength Save Percentage of .920. None of the Isles goaltenders - ignoring Poulin's tiny sample right now - are even close. Replacing both Islander goalies with an average tender would have resulted in the Isles allowing 15 less goals, resulting in them being a positive goalie at EV. Replacing Just Nabokov would save 10 goals. For reference, every 6 goals saved is an extra win, and every 3 goals saved is an extra point. So Nabby has cost this team 3 points, DP 2 himself.

Are these Numbers Unfair to Islander Goaltenders?

Let's not end our discussion there. It is quite common to see objections to these types of #s, arguing that they don't reflect the fact that Islander goaltenders are facing "harder shots" than opposing goaltenders due to a porous defense. Is this really the case?

The answer would seem to be no. Let me give a few reasons.

First, in 8 games this year - soon to be 9 - there have been fans of opposing teams tracking "scoring chances." What does this mean? Well, they're essentially counting how many opportunities each team gets throwing a shot at the net (note: missed shots count as scoring chances, blocked shots do not) from dangerous areas/situations. Generally scoring chances are shots from the following area of the ice: 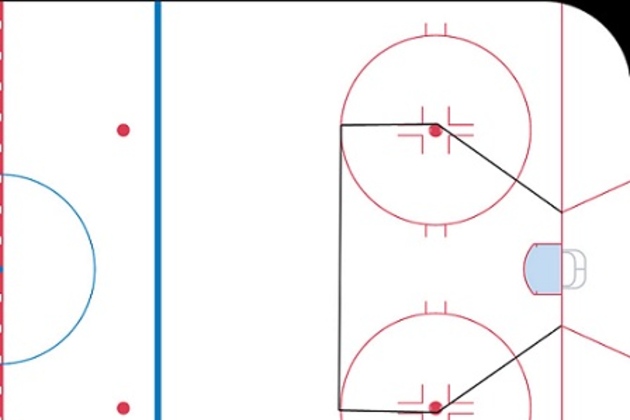 Individual scoring chance trackers do have discretion to call shots from outside this area - for example a screened shot from a little beyond the point - as a chance when appropriate - this is not a hard definition. But for the most part, if a shot is not a scoring chance, goaltenders should save the shots.

In the 8 games, trackers have found that the Isles have been outchanced in 3 games and have outchanced the opponent 5 times at Even Strength. In these 8 games, the Opposition goalies have faced 90 scoring chances and saved all but 17. Nabokov hash faced 84 chances and saved...18. Yeah, in these 8 games Nabby has faced 6 less difficult shots than his opponents and yet he's let in one more. In fact, Nabby has allowed goals on 21.4% of chances faced - the average team result seems to be closer to the 12-15% range. Yeah, 21.4% is awful.

So the scoring chance data would seem to indicate that not only is Nabokov not facing an extraordinary amount of difficult shots, but he's also being extremely ineffective at preventing them from going in. That's not good.

Still there are two critiques of this data that need to be addressed:
1. It doesn't differentiate between chances at all - some chances are harder to face than others; and
2. It relies upon only 8 of Nabokov's 17 games and thus perhaps is misleading.

Critique #1 is true yes, but I'll address it later because it's relevant to another part of this discussion.

Critique #2 is indeed true, and I'd argue that Nabokov probably has faced more scoring chances than the Isles have put forward as the Isles are slightly being outshot. That said, this research includes games that include 18 of Nabby's 43 goals and show him being particularly bad at stopping shots in those games. If Nabby allows 15% of chances to go in, then He only allows 12 goals in these games - 6 less than he actually did. So while this data is incomplete, Nabby would have to be seriously amazing in the remaining 9 games that we don't have tracked for us to really conclude he's really only suffering from a bad defense allowing a ton of difficult shots.

Second: Think about it for a second? Is the Islanders' D really that bad? The Isles are 19th in Shots Allowed Per 60 at Even Strength (19.1 Shots allowed) - and are basically equivalent with the #16 team (28.8). That's not a sign of a truely awful D.

Etc. I could go on. I'd take the Islanders' D over all of those 3 and several other teams' D. And yet those teams all have significantly better EV SV%s than the Islanders (though Columbus' is still really bad.) Are you really believing that Nabokov's terrible #s are entirely due to facing more tough shots than those teams? (And it's not like Columbus has a good goalie either.)

Believe it or not, Hockey Analytics Research has found that goalies don't face a greater percentage of difficult shots on different teams. To put it more simply - while team defenses due tend to limit shots faced by goalies, they don't limit the percentage of shots that come from the most dangerous areas.

In other words, teams can limit scoring chances by limiting shots in general, but over the long run (not individual games mind you) teams don't seem to have any ability to prevent other teams from getting a greater percentage of their shots from non-dangerous areas rather than the slot.

This is a bit counterintuitive, but it appears to be the case. The best D's limit shots against overall (often by keeping the puck out of the D Zone altogether), rather than altering the quality of opponent's shots. This is why SV% of goalies doesn't tend to change when goalies move teams. This is why the argument that the scoring chances aren't capturing how truly dangerous Nabby's shots against have been doesn't hold water - teams don't seem to be able to limit opponent's shooting % through other ways than simply having a better goaltender.

A major problem for the Islanders this year is that the goaltending has been epicly miserable. It's been most of the reason why this team has allowed the most goals at even strength.

Now this is hard for Islander fans to get sometimes because well, we only tend to watch our own team. And we see Nabokov make some AMAZING SAVES! This is true! But if you could say also watch every other team, you'd also see not only do those teams also allow a good amount of tough shots, but their goalies ALSO make a lot of AMAZING SAVES!

We're not really good with our eyes at distinguishing good goalies from bad - since both types can make some amazing looking saves. After all, We're talking about Nabby's bad performance costing about .5 goals per game - that's not a lot. But that's why we have the #s, and they say this is a major problem.

GOING FORWARD: Nabby shouldn't be this bad the rest of the season. He's about a .911 EV SV% goalie over the last two seasons and that's what we should expect going forward. But that's still a decent bit away from average and this team needs average goaltending to survive. And Nabby's not getting any younger. (Moreover, he might be worse than that, as the year before he had a sub .900 SV% in the KHL. Uh oh).