Five players did fine things on an excellent shift that turned the game in the New York Islanders' 4-3 win over the Florida Panthers.

There is something about the way Casey Cizikas plays hockey which endears him to fans -- be they in his OHL days, or for Team Canada (he's #11 in this shift that drew an ovation), with the AHL Sound Tigers and now the Islanders. It's the kind of combination of smart fundamental plays (not trying to do too much) and non-stop hustle that makes a fan say, "now THAT was a shift!" and is contagious for linemates.

He had such a shift in the third period the other night in Florida, a pivotal shift that helped the Islanders salvage a "must-have" win after blowing a 3-0 second-intermission lead. Except this wasn't limited to Cizikas; it was his entire line and the defensive pairing of Thomas Hickey and Lubomir Visnovsky too.

We give Islanders coach Jack Capuano enough gruff here for oversimplifying the game in his public comments wih hockey cliches like "play hard, play smart" and "get it in deep, chip it, grind it." So it's only fair to point out when those concepts are executed to perfection.

This game-winning goal was absolutely one of those occasions. (In narrative form, it also served to underline why the Isles extended McDonald for two years as one of their Grinders Of Choice.)

Unfortunately, the goal highlights at nhl.com don't capture the entire sequence, so if you still have the game on your DVR or if you have a Gamecenter subscription I recommend you go back and watch how it all went down.

But because we're never above overkill in re-examining a routine (yet still admirable) play, we'll relive it in pictures below, with screen caps taken via Gamecenter:

Technically the shift by Casey Cizikas, Keith Aucoin and Colin McDonald began on the fly, with a faceoff in between their entry and the goal. But we'll trace it back before that faceoff because the line change itself was an example of the "get it deep" philosophy and a good forecheck combining to make a good line change.

The wholesale line change begins with Frans Nielsen getting the puck in deep (there's that word again) in the right wing corner, avoiding an attempt by Tyson Strachan to obliterate him, and slipping the puck behind the net for Kyle Okposo to continue the forecheck. After Nielsen gets up, he heads to the bench. Cizikas has already hopped the boards in place of Josh Bailey and joins Okposo in the left wing corner to continue grinding as the Isles continue their change.

Cizikas and Okposo team to win the puck along the boards back to the left point, where Aucoin is stationed after replacing Nielsen. The Islanders defense has also changed at this time, so you see Hickey and Visnovsky positioned along the blueline in anticipation that Aucoin will get the puck back in deep: 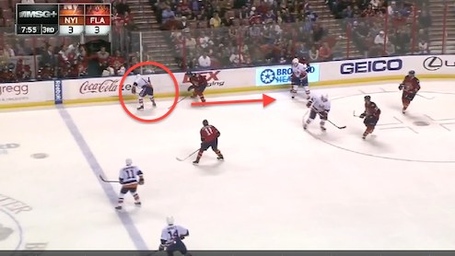 Aucoin (circled) receives it and backhands it deep, allowing Okposo (on the boards) to head to the bench to complete the change. Visnovsky and Hickey have just arrived for their shift and are ready to go whichever direction the puck dictates.

Since Aucoin got it in deep, he was able to pursue the play as Okposo heads to the bench. That allows Hickey to arc on a "safe" route through the neutral zone to the left point, where he intercepts another Panthers clear -- again, in part thanks to Cizikas' pressure neutering the Panthers clear attempt -- and puts the puck around the boards, allowing McDonald to complete the line change after subbing for Okposo: 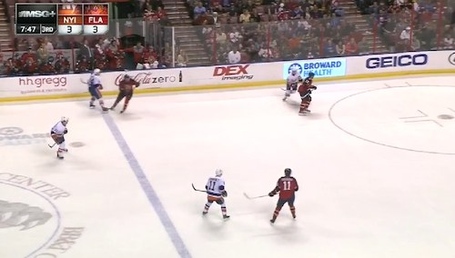 Hickey (left point) has rung the puck back in deep. McDonald is on his way into the zone between Hickey and Visnovsky (11).

This time the Panthers fetch the puck and do get a clear, but only to the neutral zone, where Hickey is there to intercept and fire it right back in. Alas, Hickey's dump hits Cizikas just a few feet inside the blueline, eliciting an offside call that brings a faceoff to center ice.

Aucoin wins that faceoff to Cizikas, who, yes, gets the puck in deep, and pursues Brian Campbell behind the net. That causes Campbell to reverse the puck to the right wing corner, but McDonald's forecheck is prompt and he keeps Erik Gudbranson from being able to clear: 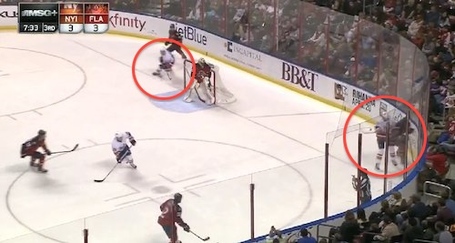 Cizikas (circle near the net) has forced Campbell to reverse the puck, but McDonald (circle in the corner) was fast on the forecheck and keeps that reverse from doing anything. Aucoin heads to the half boards to cut the puck off if it gets there.

As McDonald and Gudbranson battle, the puck eventually gets to the half boards, where Aucoin wins it and feeds it back to McDonald in the corner. With the Panthers defense focused on the Isles forwards, McDonald spreads things out by feeding it to Visnovsky at the right point. Visnovsky, as he so often does, uses a fake shot to buy time and draw his checker out enough to make him moot, then feeds McDonald along the half boards. McDonald sends a shot to the net: 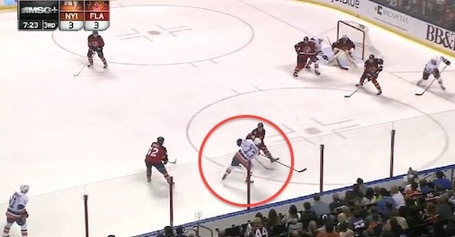 After McDonald feeds Visnovsky at the point, Vis sends it back to McDonald (circled), who shoots at net.

You can't tell in the screenshot above, but Cizikas times his arrival perfectly for a potential deflection and screen of Scott Clemmensen. The puck rebounds to the near corner again, but once again an Islander forechecker is on the ball and Aucoin wins it.

And this is where it gets fun, as these three forwards are about to cycle in a way we don't see often enough from the Isles: 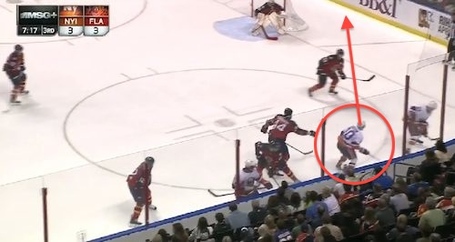 Aucoin (circled), having won the rebound in the corner, slipped it back to Cizikas, and prepares to head to the back of the net. 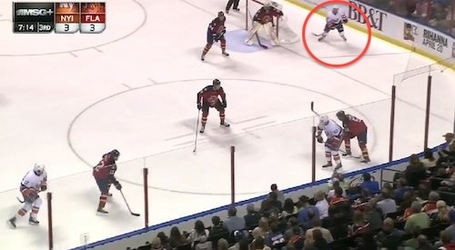 Three ticks of the clock later, Aucoin (circled) is behind the net and is about to receive Cizikas' chip around the boards.

Having chipped it from the side boards to Aucoin behind the net, where does Cizikas go? Well, to the front of the net of course: 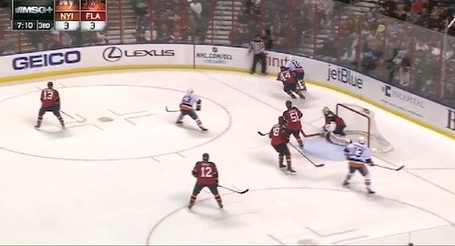 Aucoin is carrying it in the corner and Cizikas is cocked in shooting position, but Aucoin is hounded well enough by Gudbranson (44) that he can't find a way to get Cizikas the puck ... yet

The opportunity to receive a pass in shooting position having passed, Cizikas then heads behind the net himself ... where Aucoin -- clearly in sync with his linemate -- chips it back to him: 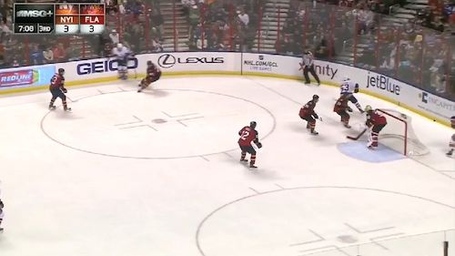 Aucoin has chipped the puck to Cizikas behind the net. With McDonald open on the other side, Cizikas banks it off the boards behind the net to him, where the magic happens.

Call it chemistry, call it cycling, call it working "hahd and smaht" -- the purpose and intended outcome is the same: Get the opposition defense chasing and hope that movement ultimately exposes them and paves the way for a mistake and a shot.

That's what happens here, as Gudbranson has followed Aucoin up the half boards, leaving Campbell (51) and Shawn Matthias (18) to cover Cizikas and McDonald. But both Campbell and Matthias turn away from Cizikas and cut in front of the net to go after McDonald...

...and unfortunately for them, McDonald isn't coming to the front of the net. Instead, in his moment of brilliance, McDonald reverses direction and goes back behind the net himself, where he finds Cizikas uncovered for just long enough (that's Gudbranson who comes flying back into the play, too late, toppling over Cizikas after the goal is scored) to bang McDonald's pass home: 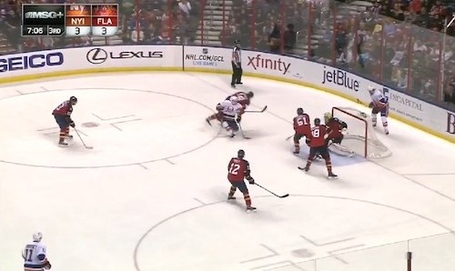 Here's video of the payoff, and the ensuing celebration -- which was equal parts relief that the Isles had reclaimed the lead, and euphoria that an exhausting shift of good work has paid off:

Both the cycling and what the Panthers coverage "should" have done to prevent it is easy to draw up on paper and easy to point out on video in retrospect. But in the moment it depends on so many moving parts and players who are reading each other and their opponents.

And, to use one more hockey cliche, this play depended on the Islanders winning so many individual "puck battles" along the boards. In hockey broadcaster jargon crossed with Spinal Tap terms, the "battle level" went up to eleven on this shift. Nielsen, Okposo, Cizikas, McDonald and Aucoin each won battles along the boards in this sequence, and Hickey and Visnovsky made poised plays on the puck from the points.

(As an aside, these are things that don't quite register as impressively in metrics where shots are used as a proxy for zone time and/or possession, but obviously shifts like this can be useful even when they don't result in a goal or multiple shots.)

We all praised the Islanders hybrid third line for this shift after they forged the game-winner with their guts and battlin' and all those "things that win hockey games." This is one instance where the hockey broadcaster cliches, the coachspeak, and the reality of events converge in total harmony.