Last season, I broke down performances for each team based on 10 games played. As teams play different schedules, they don't always have the same number of games played between game 1 and game 82 48 of the year. This season, 8 game chunks will give us 6 equal sections of season to compare.

In addition to tracking wins, goals and special teams, this year I'm also tracking giveaways, takeaways, blocked shots, missed shots and face offs. There is no interconference play, but I'm keeping all 30 teams mixed regardless.

The first place to look, naturally, is W/L records and points. It's pretty obvious, especially for the first 8 games. I've also included scoring for and against. 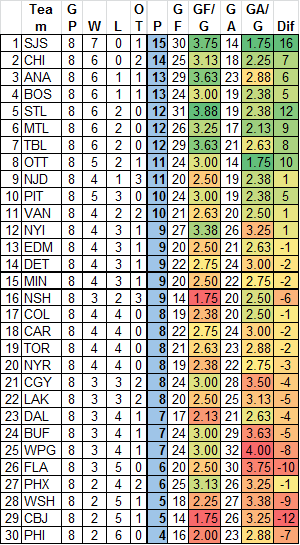 Now a look at special teams. Special Teams Index is calculated by subtracting the number of SH goals allowed from the PP goals scored, then dividing by PP opportunities, and adding that result to the penalty kill number, which is (times shorthanded - PK goals against + SHGF) divided by times shorthanded. An average result would be 100%. I've also included the number of penalty minutes taken. 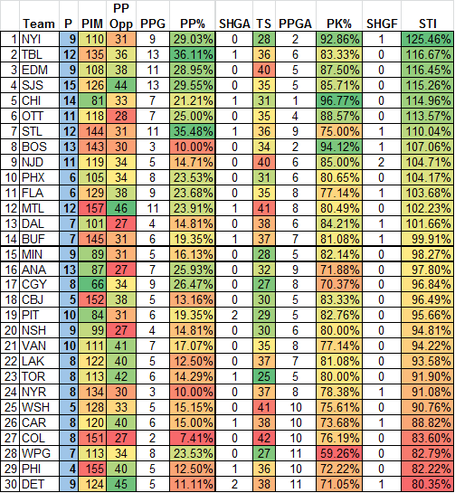 And now a look at Realtime stats, sorted on faceoff winning percentage. 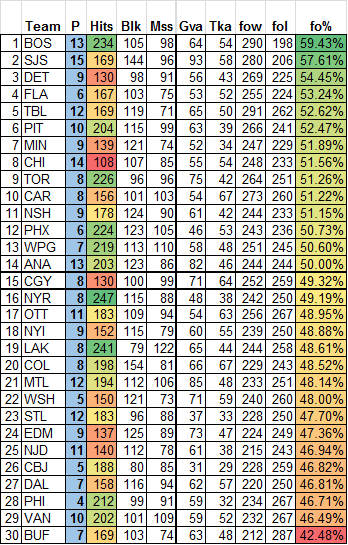 If you'd like to play with the data and make your own sorts, or whatever, I put it up as a Google Spreadsheet.