A look at how Michael Grabner created the shorthanded breakaway that could have turned the game, and how Johan Hedberg denied him.

New York Islanders fans alternately love Michael Grabner for the excitement he creates and bemoan his inability to convert more of his breakaways. It's a lament that is both technically warranted yet probably unfair: Few players in the league are able to create the dangerous opportunities that Grabner's anticipation and speed do, so his only fault here is not finishing them as often as Pavel Bure.

If he did ... he'd be Pavel Bure. (A Bure on steroids, really, since Grabner's defensive acumen is miles beyond what the offensive dynamo Bure offered during his career.)

Fans remember them because they are exciting, they happen a lot, and doggone it we can't just push the "deke" button (or whatever you do on PlayStation these days) to make it a goal every time. We tend to overlook the fact that on breakaways, the odds are still in favor of the goalie. (Even in the ridiculous shootout, when the shooter has the advantage of taking his sweet Schrempian time because no defenders are in pursuit and the NHL wouldn't dream of making it like an actual game situation, the odds still favor the goalie.)

During Sunday's tight Islanders-Devils affair, the game was still scoreless 7:32 into the third when the Devils went on the powerplay. With 12 minutes left, Brian Strait forced the play up the boards and almost got the clear, but Ilya Kovalchuk stopped it and tried to make something happen quickly by making a no-look pass along the blueline.

That's a bad move when Michael Grabner is lurking.

Painfully for Isles fans, Grabner was unable to convert what could have given the Islanders a 1-0 lead and perhaps paved the path to a win, instead of the 3-0 loss that ultimately resulted.

In other breakaways this year, Grabner's scored on a straight wrister past Marc-Andre Fleury, hit the post on Martin Brodeur, and deked for a goal past Anders Lindback.

Let's take a closer look at what Grabner tried this time:

The first thing to notice is how this originated. This was such a clear-cut breakaway -- notice how much time Grabner has as he enters the zone -- that it wasn't created through the traditional route of Grabner's pure speed. Rather, it was his (still underrated?) anticipation skills.

When Kovalchuk keeps the puck in, Grabner knows Kovalchuk's thinking one thing: Keep the puck in the zone, and turn Strait's pressure up the boards against him. (How often in hockey do we see an almost-clear turn into a dangerous chance the other way? That's due to the nature of everyone on the ice acting on their own anticipation. As the puck looks increasingly like it will leave the zone, players tend to move up in anticipation of that. A sudden interception then catches them "cheating" the wrong way, increasing the opportunity for an odd-man opportunity against.) 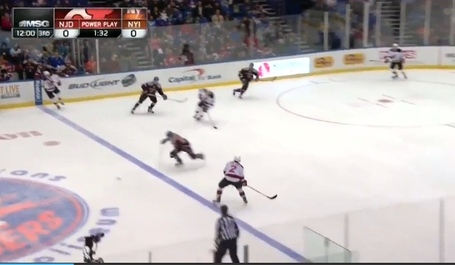 Grabner has already intercepted the pass and pushed it over the blueline. Note the positioning/body language of Marek Zidlicky (#2) and the other two Islanders (Strait and Frans Nielsen) in the frame: All of them are still reacting to Kovalchuk keeping the puck in, angling toward the Islanders goal, while Grabner is already off to the races in the other direction.

In this instance, the safe way for Kovalchuk to keep the zone time alive is to try to send the puck back down the boards where a teammate hopefully wins the battle; but the shoot-the-moon way is to spring what he hopes is an open man (Zidlicky) on the other side of the ice.

So what should Grabner do? Well, as noted we've already seen this year he has several options in his arsenal. The question -- and the curse -- for any player on a breakaway is to balance thinking through those options versus following the instinct of the moment. 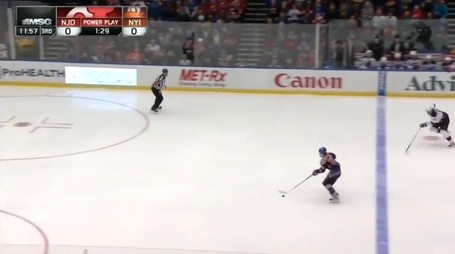 I've got time, yes I do / Now I'll think my options through

In this case, Grabner even takes a peak and realizes he has all the time in the world. Ironically, this may be his downfall here. He approaches the slot keeping those options open, but he doesn't quite ideally time the one he chooses. 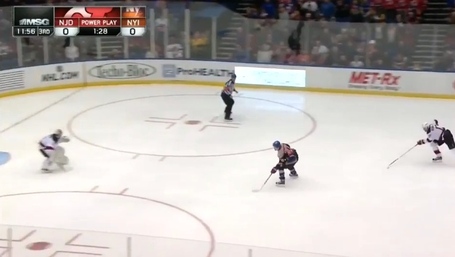 "Hey Johan, I'm using my time to slow up a bit and make you respect my forehand option here."

Already as he enters the high slot, you can see him decide to sell the straight-up shot, or at least make Hedberg think he's keeping that as an option, rather than stickhandling deeper into the slot before offering that as a possibility. The problem is he's still at a distance where Hedberg is going to be able to recover even if he bites for the fake forehand.

Now we come to the crucial moment: Grabner fakes forehand, but he's still at the hashmarks when he does it. Hedberg is not playing this too aggressively -- he's still at the top of his crease, which is a safe distance to handle a possible shot from the slot while also being able to cover a deke that attempts to tuck the puck behind him. 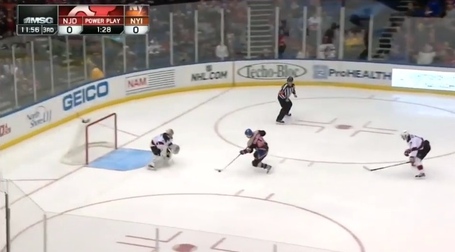 Note Grabner's body position: He's already stopped his forehand fake (the puck is now technically on his backhand, since he's stopped that fake shot and begun pulling it back to forehand position), but it hasn't really gotten Hedberg out of position. So we're back to square one.

In the screen shot above, Grabner's fake hasn't gotten Hedberg to bite. That's theoretically okay, except for one problem: his body language at this point makes the possibility of trying a backhand deke increasingly unlikely, as you can see he's already leaning to his left.

I mentioned the mix of thought and instinct before; at this point Hedberg's experience and instincts are probably telling him to still guard for either a shot or the deke to a forehand tuck. But he can safely rule out a move to the backhand. (The lack of a backhand threat also affects what Grabner can do with his forehand deke, as we'll see in a moment.)

Here's where it gets cruel, because even at this point the play can go either way. 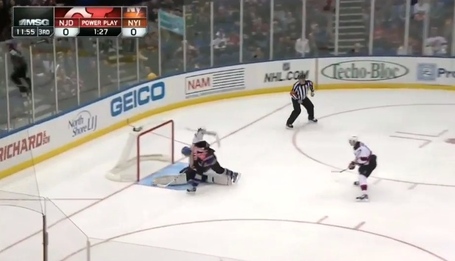 Did someone say Grabner is fast? The last four screenshots have taken under three seconds. Even though Hedberg knows it's down to either the forehand shot or forehand deke/tuck, the distance Grabner travels at speed still makes it a challenging save. Hedberg has to do a full stretch (and he ends up sprawled like a pretzel afterward) to make the save.

And yet ironically, despite Grabner's overall speed, he's also hindered by the lack of speed with which he transferred from that forehand fake to this forehand deke.

In hindsight -- always so easy to do when doing a frame-by-frame look at a three-second play! -- Grabner should have tucked five hole instead of trying to go all the way around Hedberg's right pad. Of course when doing that initial fake, you never know whether a goalie will go butterfly (and protect that five hole and low post shots better) or go all stretch and protect your attempt to tuck it in near the post.

Alternatively, as mentioned above, he could have: 1) waited a little longer before his first shot fake; 2) kept his body in a position that still sold the possibility of going backhand, and/or 3) made a faster transition with his stick (forehand fake/stop with backhand/pull to side for shot/deke) through the whole sequence.

This is, of course, picking apart what happens in mere seconds, affected by a myriad physiological and game condition variables.

The one thing that would be hardest to do given the move Grabner chose -- though it's something we as fans scream when we see the goalie prone so invitingly -- is to lift the puck over Hedberg's pad. I'm afraid this really isn't possible given the skating speed here and the proximity of Grabner's stick to Hedberg's pad.

It's a nice thing to request in a video game, but Grabner probably would've had to pull the puck back yet again to get the leverage on his blade and angle over the pad, which might have meant lifting it from a sharp angle as he crossed the goal line. Alternatively, had Grabner sold the backhand option earlier, he might have had more space to shoot high (since Hedberg's position probably would've been less committed to this side) and in fact his own hands would have been harnessing the puck with more coiled energy to make a high shot easier to pull off.

All of which is to say hockey is hard, and breakaways are hard even though they look like giftwrapped scoring opportunities. Breakaways are funny for the shooter because a hundred things can be going through the mind, ranging from what worked last time to what "feels right" at this particular moment and what, if any, encounters you've had previously with this goalie. (That's to say nothing of which side and to what degree a defenseman is applying pressure from the rear.)

Grabner didn't cash in this one, and it cost the Isles because they gave up the winner on a powerplay later in the period. But it's worth remembering that the last two he cashed in were well done and crucial to Islanders victories.

New York Islanders Gameday: Round 3 with the New Jersey Devils