The Islanders have removed one goaltender who wasn't working. Will his replacement make a meaningful difference?

With the New York Islanders at long last waiving injury-ravaged Rick DiPietro, they have the opportunity to improve a position whose inadequacies stretch back several seasons. When DiPietro clears waivers tomorrow, it will pave the way for the recall of Kevin Poulin, who is set to start tonight as the Bridgeport Sound Tigers begin a three-in-three set.

But will Poulin answer what ails them? Will he get the chance to let us find out?

Here is how the Islanders goalie numbers stack up this year:

You don't have to know much about sorting goaltender stats to know that an 8 at the beginning of a save percentage entry is a bad sign. For the season, we're still in the "small sample" period, even for Evgeni Nabokov -- see this Kent Wilson post for a great lament on how hard it is to divine truths from goalie stats -- but at 37 years old Nabokov appears still good enough to keep a team in games, but not consistently good enough to steal wins for them.

(For example, last night he hardly stole the win in Montreal, giving up three goals on 33 shots -- albeit two of them on defensive breakdowns -- but he did make several saves that kept the Canadiens' two-goal lead from growing to the insurmountable. Of course, doing the latter is a goalie's job, and saving a team from the former is how a good goalie separates himself. But now we're already talking in the subjective language of broadcast-speak.)

The ugly 7-0 loss to the Flyers was certainly a case of the Islanders skaters not showing up, but there was a point at which it was clear Nabokov wasn't going to stretch himself trying to stop the bleeding. The final goals in that beatdown were ones you would not want him giving up in a close game. Is that a sign of a older goalie on the decline? A savvy veteran saving himself for where it matters? Either way, a common thread there that says, "this position could be better."

Last season, Nabokov's even strength save percentage was .917, tops on the team but putting him in mundane leaguewide company with goalies like Corey Crawford, Ondrej Pavelec, and -- some names that may surprise you -- Jonas Hiller (not the same since vertigo?), Marc-Andre Fleury (a particularly bad year for an overhyped goalie) and Carey Price. When you see goalies like Mike Smith and Jaroslav Halak put up numbers in the .938 range, you have a good hint that some teams' disciplined team defense helps their goalies more than others.

Further, and not that this is a tell-all arbiter -- there really are none with goalies -- but Nabokov had two shutouts in 42 games last season. At his peak he was putting up six or seven shutouts per season for very good Sharks teams. This Islanders team is nothing like those Sharks teams. But could its record be a little better?

For the Islanders, waiving DiPietro removes an inadequate backup from the equation. Does it also present another viable starter candidate? The theory for yes rests on two possibilities:

Can the Islanders count on theory two? Poulin's save percentages last year in six games for the Isles were all in the low .90x range, with a .905 save percentage at even strength. The season before was much better in 10 NHL games: .921. 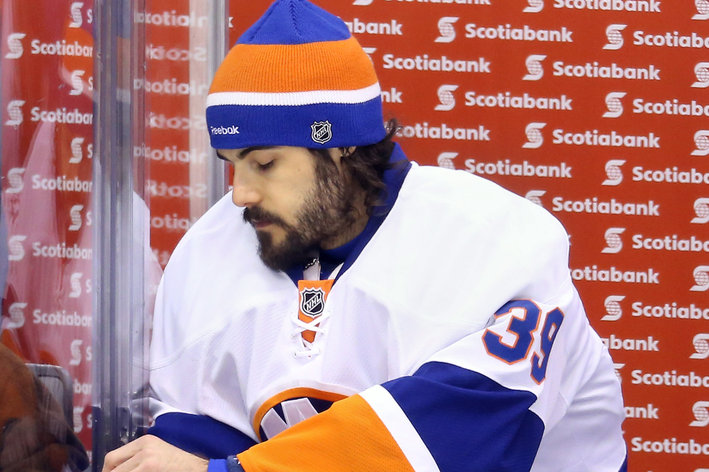 The long saga with the injury-prone goalie takes another, climactic turn.

But of course none of these samples are large enough to give us a firm idea either way. His promising NHL debut in 2010-11 was coupled with a .932 AHL overall save percentage that year. Last year's poor NHL numbers were coupled with a drop to .912 in the AHL. (Note: We only have overall AHL save percentage figures, not even strength separated out.) And the lovely 2010-11 was separated from the more worrying 2011-12 by the dislocated kneecap that ended his 2010-11 just when he was shining.

So which is the real Kevin Poulin? To quote Wilson from the piece linked above (emphasis mine):

Mostly the biggest revelations for me in this area is realizing just how little we actually understand (and can accurately predict) goaltender performance. And by "we", I don't just mean the egghead stat community - NHL decision makers consistently struggle to make good decisions when it comes to their netminders. This is one of the primary reasons I advocate not picking goalies in the first round of the draft - not because an elite goalie isn't useful or high impact (quite the opposite), just that they are much more difficult to both groom and predict than skaters.

The uniqueness of the position in the sport, its relative depth of importance combined with our general impotence at evaluating performance (outside of extreme outliers at either end, of course) makes the goalie a challenging paradox for GM's: the guy on the team who can have the single most influence over its goal differential - and therefore success - is the hardest to effectively evaluate. In addition, there is a large middle class of goaltending talent in the league and the supply can often outstrip demand.

Those who have watched Poulin this season in Bridgeport would tell you he's looked like 2010-11 Poulin in some games, like 2011-12 Poulin in others. He's stood on his head at times, looked out of sorts at others. The team takes a lot of penalties, so he gets his share of arduous (and sometimes stat-killing) PK time.

In short, Poulin in the AHL this year sounds like Nabokov in the NHL: Can be good, not often great, not a head-turning league leader by any means. We can be pretty confident he is not an extreme elite outlier. But the Islanders must hope he is at least in that "large middle class of talent" that makes so many NHL goalies interchangeable these days.

Poulin is starting tonight for Bridgeport in Springfield, in what may be his last AHL game for a while. (And what a wild situation to be in, focusing on the AHL game tonight while knowing that tomorrow you are essentially swapping places with the goalie who has been with the organization for a dozen years.)

Nabokov gets the Islanders start Saturday night in Buffalo. After that, we know the Islanders have at least upgraded the backup goalie position, but we don't know by how much.