So we've been talking goaltending. As you know, Isles goaltending has been horrible forever. Since the lockout, only 4 teams have had worse goaltending than the Isles, not a good sign. The goaltenders in the Bridge do not look likely to be average NHL goalies at the moment, and Rick DiPietro has the distinction of having the absolute WORST Even Strength Save Percentage the last 3 years (Min. 900 shots faced). This is not a good sign.

So what about Free Agency? Who's available? I gathered up in a spreadsheet all the NHL's Even Strength Save Data since the lockout and used the last 3 years of EV SV% data to take a look at who the Isles' options are: 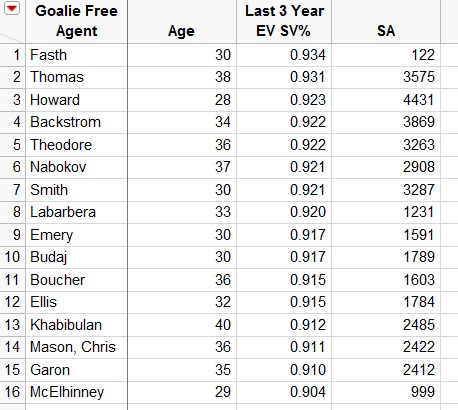 The above are 16 UFA goalies - the highest paid ones that have any relevant data available - for next year. For Reference, the NHL AVERAGE Even Strength Save Percentage is .920. I've also included the players' age and the sample size. This is only over the last 3 years and this year.

A few notes:
1. Most goalies on this list are old - teams tend to lock up good goalies for a while and thus UFAs tend to be older goalies. There is one interesting exception.
2. 8 Goalies are blatantly below average and should not be considered.
3. The best goalie with a good sample size is a guy the Isles already have the rights to. There's no reason whatsoever why they shouldn't toll Thomas' contract - he's an elite goaltender even at his age. But let's pretend this won't happen.
4. Ignore Fasth - his sample size is way too small to care about.

Labarbera is out due to his sample size - if you go beyond the last 3 years he's at .916% for his post-lockout career, which is below average.

Nabokov was below average last year and if he still is this year he'll drop below the .920 threshold. He's out.

Theodore is not only old but his numbers are skewed by career high numbers last year which are likely a fluke. If he maintains it again this year we'll talk, but for now , he's out.

Smith's #s are all over the place: one elite year with TB, two awful years with TB and then last year's elite #. If he regresses as expected this year he'll probably not be over the threshold; if he doesn't he'll be extremely expensive, probably more than he deserves. For now, let's set him aside.

We're left with two: Backstrom and Howard. Backstrom has been talked about a bunch - slightly above average numbers, not as old as some other guys, a decent track record, etc. On the other hand there has been some thought in the hockey metrics community he's faced weaker shots than other goalies. Hard to tell.

Howard on the other hand is intriguing and is surprisingly not being talked about. Perhaps this is because Detroit is expected to lock him up - which may make this exercise pointless - but if he does reach free agency, he should probably be the Isles top target. He's relatively young with an above average EV SV% over the last 3 years. This would solve the Isles' needs for some time and at his age, you wouldn't worry about a decent sized contract.