A look at the Islanders powerplay at its best, with John Tavares pulling the trigger.

The New York Islanders powerplay has been clicking in this young season, functioning just as you'd draw it up with its talent despite the loss of P.A. Parenteau and absence of Lubomir Visnovsky.

Replacing Parenteau with Boyes, a fellow right-handed shot and good passer (who probably has a better shot than Parenteau) has certainly prevented a dropoff there. Another factor, important for any powerplay, is good puck movement. (This facet drew the notice of the Penguins announcers during the 4-1 drubbing in Pittsburgh, and it also drew a quickie post by Adam Gretz at CBS.)

But that John Tavares goal Gretz noted against Pittsburgh also benefited from a few more subtle things aside from the great passing that kept the Pens penalty killers running around their zone: Frans Nielsen keeping Tavares' wide shot from leaving the zone, Tavares moving in a little closer on his second attempt, and Matt Moulson serving it up on a tee.

Here's the full sequence, but we'll break it down further below, which may be interesting to fans who haven't had much on-ice experience:

The Penguins are pushing up to the points on the PK, which is something the Isles are clearly prepared for. It's a battle of execution at this point. A powerplay uses the whole zone to stretch the PK box out enough that interior passing lanes open up. That doesn't work if it doesn't use those passing lanes well, or if a PKer Grabners the lane anyway.

The result is a shot; not a good one, but one that keeps the Pens on the chase. 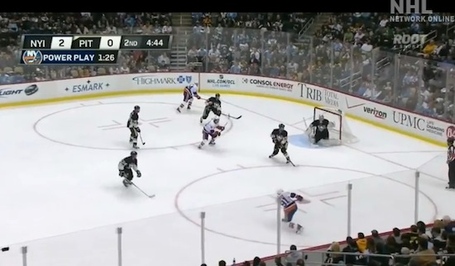 Tavares shoots from farther away than you'd prefer, but after a nice sequence forcing Fleury to move across his crease.

Tavares' first shot here is a classic case of why players shoot one-timers, and why PKers are willing to concede it from that distance: There is less control, the pass coming from a longer distance off Brad Boyes' stick and being less directable than a shorter pass or one that is settled for a snap shot. But what one-timers lack in precision they can make up for in speed: the opportunity is to direct the puck on net quickly, before the goalie has time to move over and square to the shot.

It just doesn't work in this case, and you can tell the shot rides high off of Tavares' release. You can even tell in his body position approaching the puck that he has to adjust to get it off.

On the most basic level, powerplays create scoring opportunities because the extra man allows for creating more situations that force the goalie to move laterally, and/or more situations where you can create a Moulson-like screen that prevents the goalie from seeing the puck. You want the goalie either "without eyes," or moving side to side so he's not set, or both. The constant threat of both is why a goalie can earn his night's pay and his Weight Watchers points on the PK alone.

Of course, on Tavares' first shot, it's a bit forced, he gets decent "wood" on it but not in a controlled way, and it sails over the net and off the glass.

Critically, Nielsen at the point not only collects the shrapnel from Tavares' wide shot, but he freezes his opposing checker (Brandon Sutter) just long enough to make an incisive pass down low to Matt Moulson. This is a subtly impressive play by the Dane. Normally the PK would want to pressure Nielsen as he collected that bouncing puck, his back to the zone, and force a clear or at least limit his passing option to a dump along the boards.

The best time to get aggressive on the PK is when a PP player is "dusting off" a loose puck or errant pass to settle it; however the reason players are on the PP is because they have the hands to control such pucks quickly, before the opposing player can intervene.

Nieslen's puck handling commands respect, and the Islanders' puck movement already put the Penguins into what I call "energy conservation mode" -- in other words, don't stretch yourself unless you know damn well you're going to win the clear. Against Nielsen, Sutter couldn't be sure he'd win the puck, and he was likely already fatigued enough where the risk of losing that battle would create a 4-on-3 down low.

So Sutter pressures just enough to hopefully make Nielsen think he's serious, but Nielsen doesn't buy it, doesn't rush it, and instead calmly lets Sutter pull up -- "Are you done now?" -- while observing his options. (One of those options is going point-to-point over to Mark Streit, but as we quickly see Nielsen fancies something more dangerous.) 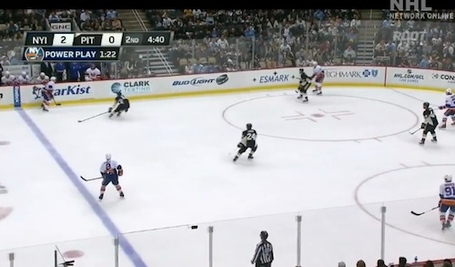 Nielsen collects at the point, forces Sutter to stop, and says "This is not the puck you are looking for."

By pulling up, Sutter thinks he's at least protecting the interior. As it turned out, he was wrong. Nielsen is able to freeze Sutter and find a passing lane anyway.

ONE ON ONE: THE AIM IS TO DECEIVE

(I can't emphasize enough how much non-contact one-on-one encounters in hockey turn on each player's ability -- both the puck carrier and the pursuer -- to deceive the other into thinking they have more options than their counterpart realizes. Nielsen wants Sutter to think Nielsen has several options, so don't bother committing; Sutter wants Nielsen to think, "I'm coming! You better get rid of it! You better force it somewhere!" This give-and-take in each individual moment is one of hockey's glorious mini-battles.)

With Nielsen's objective achieved, we arrive at the climax of the play.

In theory the Penguins are still okay here. The men on the strong side of the ice are still covered: Sutter is theoretically limiting Nielsen's options, including even a vague threat to block a cross-ice pass to Streit; Boyes, who made that last one-timer feed to Tavares, is covered closely on the half boards; and Brooks Orpik is minding Moulson, whose house is the front of the net. The only open man is Tavares way back at the far end of the other faceoff circle, where he just shanked that last one-timer, right?

The only open man is Tavares.

That's the thing about powerplays. They are designed to create space for the best players so that the PK says silly things like, "We're alright, the only open man here is John freaking Tavares."

This time, instead of staying where he was for the first shot -- when Boyes rushed a feed across the slot to keep the Penguins moving -- Tavares is able to encroach much closer and accept a delightful touch pass from Moulson, whom Nielsen has found because Frans Nielsen, amen. 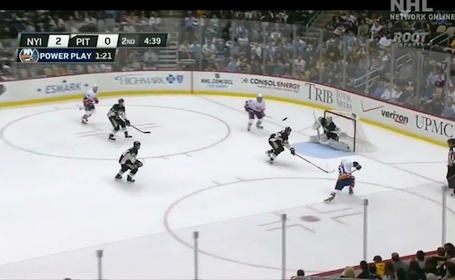 Orpik is left spinning around, Tavares is left with an excellent shooting position from quite close in, and Marc-Andre Fleury is forced to push across the crease laterally without really getting to size up what he's facing. The result is a goal that even the homer Pens announcers have to admire.

Coda: Shoot Low and Near, or High and Far?

Which brings me to the one aspect I originally wanted to bring up about this play before I sent myself into the preceding powerplay vortex: Tavares' shot is either brilliant or lucky here. He doesn't score short-side, he scores high far-side, at the spot Fleury just vacated over his right shoulder.

YOU SHOOT FOR DAYLIGHT. John Tavares shoots where daylight will be.

On plays like this, shooters more often go near post, as that is the spot that requires the goalie to travel the farthest distance and it's the spot most likely to still be open when the shot is unleashed. But goalies know this too, so they'll do their best to lunge over to that spot as quickly as possible, only asking questions later. (Did I mention I enjoy the mental give-and-take of hockey?)

So sometimes forwards, knowing the mobility and intuition of today's goalies -- yes, even crazy goalies possess intuition -- will play on that tendency and go far side anyway, almost to "wrong foot" the goalie (to steal a soccer term). Looking at the screen shot above, you can see after Tavares unleashes the shot it's headed right at Fleury, but Fleury is headed right to that open space.

Whether Tavares in this instance was aiming far and high (probably, given his ideal setup and shooting position here), or whether he ended up overcompensating for his previous shot that went wide near-post (possibly), we can't know. He may not even know. I swear, these stars and their "breathe through your eyelids" instincts that leave us in awe.