Before they were a Dynasty for the ages, the Islanders were Long Island's lovable blue collar team. And in 1979, they gave the community a Christmas present that has been lost to time.

(Ed. Note: this was originally published on December 19, 2013. So, uh, just ignore that stuff about a "season that's painfully gone sideways." Thanks and Merry Christmas!)

This month, several NHL teams - mainly ones that have won more than four games in the last month and a half - have released joyful holiday videos and pictures that poke fun at themselves and allow for a little breather during a typically grueling NHL season.

The Capitals, Canucks and Blues are among the most appreciated so far, and the Sharks' video is longer than all three The Santa Clause movies combined. These players, guys trained to play a tough, dangerous sport at its highest level, take the time to deliver some holiday cheer using bad sweaters, animals and fake musical instruments.

The Islanders, aside from their annual charity toy shopping trip, have not participated. I don't know why this is. The team is generally close-lipped, so on one hand it's not a surprise. The fanbase, palpably angry at a season that's painfully gone sideways, are even more sensitive than they usually are.

So maybe nobody's in a festive mood this Christmas which, let's face it, happens to everyone.

Undaunted, I went searching for Christmas cheer from the Islanders and I came across an item that I didn't know existed. Maybe some reading this had a copy or still do.

Perhaps this discovery can give Islanders fans a few moments of peace as 2013 winds to a close.

Home for the Holidays

At Christmas 1979, the Islanders released Home for the Holidays, a ten-track album of holiday standards sung by Joe Duerr, the regular anthem singer at Nassau Coliseum at the time, and the team's players. The record predates the Dynasty, as the Islanders would win their first Stanley Cup in May of 1980.

You can listen to the full record at Youtube, courtesy of user terminiv who, according to the description, is actually a Rangers fan. But it's the holidays, so we'll let that slide. Give the vinyl a spin (complete with record skipping at the 17 minute mark):

Sadly, there's not a lot of information out there about Home for the Holidays. Most of it comes from auction listings that, also sadly, have ended.

The album was recorded at T.A.M.I. records in Merrick, Long Island. It came packaged in a red gate fold cover, with in-game pictures on the inside. On the back is a Christmas tree with the players - and Al Arbour's and Bill Torrey's - faces comprising the ornaments.

Clark Gillies gets the vaunted spot nearest to the star, probably because he beat up everyone below him. Mike Bossy and his perm are right below Gillies. Bryan Trottier is in the doghouse near the bottom of the tree.

An auction listing at Etsy has a small gallery of the record and more pictures like this: 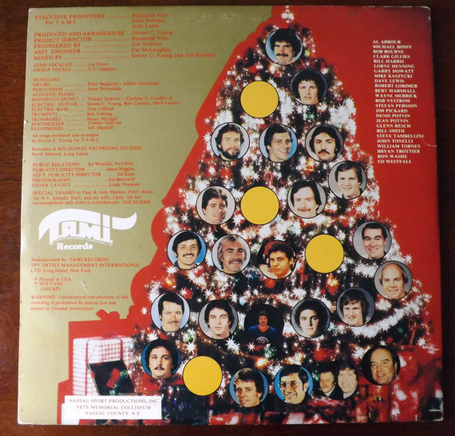 Yes, the Islanders sing on the record, but only five of the 10 songs. The others are performed well by Duerr, who sang at the Coliseum for 15 years, and the backing band listed here.

But don't expect Jean Potvin to bust out a Pavarotti-like rendition of Adeste Fidelis. Like the Islanders themselves, the record is all about teamwork.

The players, seven of whom are in the Hockey Hall of Fame, sing gang vocals on a few favorites: Rudolph the Red-Nosed Reindeer, All I Want For Christmas is My Two Front Teeth (Note: get it?! Teeth! Because hockey players... meh forget it), Santa Claus is Coming to Town, Frosty the Snowman and We Wish You a Merry Christmas/Auld Lang Syne which is the album's closer and the gem of the entire production.

Not only is We Wish You... sung by the 1979-80 Islanders, but it's done to a disco beat that perfectly summarizes the era. The medley of two songs is seamless and hilarious. You can feel the winter boogie wonderland through the speakers.

Hockey Around the Christmas Tree

I think the most intriguing thing about the record to me is that it was released before the Islanders completed their takeover of the NHL.

When this was out, they had a reputation as playoff chokers, and had just laid the mother of all eggs the previous Spring by dropping the semifinal series to the Rangers. They also couldn't pay the bills, almost declared bankruptcy and had a future that was very much in doubt.

This Christmas, when the time comes to thrown on some holiday music as you gather with friends and family, go ahead and call up Home for the Holidays on the nearest computer or smartphone.

And when Aunt Bethanny asks, "Clark? Is this Perry Como?" you can answer with, "No, Aunt Bethanny. It's Lorne Henning and Chico Resch."