Fans that are sick and tired of their lousy, losing teams can fill out this form and cut them out of their lives once and for all.

The 2013-14 NHL season isn't even a quarter over and already a few teams have their fans packing it in for the year.

The Florida Panthers, Buffalo Sabres and Edmonton Oilers are among those that have gotten off to terrible starts and, at this pace, will need flawless play and a miracle or two to qualify for the post-season. By next week, they could be joined on the sidelines by another half dozen teams. Some players have been sold off or traded and rumors are swirling that further changes could be coming.

For the home fan, a bad start means not getting a solid chance to really enjoy hockey before questioning and doubting the team. And if your team has struggled for a few years, the threshold for putting up with a slow start gets shorter and shorter. Wondering why you're even still supporting a team before the calendar hits Thanksgiving (American version) can be demoralizing and depressing.

Fortunately, the NHL feels your pain and has some paperwork for you.

The league released its annual Fandom Cancellation Survey today for fans that want off the NHL's runaway franchises and to move on with their lives. Simply fill out the form, enter your e-signature and mail it to the league's Fan Cancellation Department. Then you'll be free and clear to forget about your horrible, terrible former team affiliation forever.

A PDF version of the form is available for download here. The PDF also contains tips and explanations of the form's seven questions. You can complete the form online and print it.

Why suffer when you can be relieved? Take the survey and say goodbye to those clowns and thieir circus. You'll be glad you did. 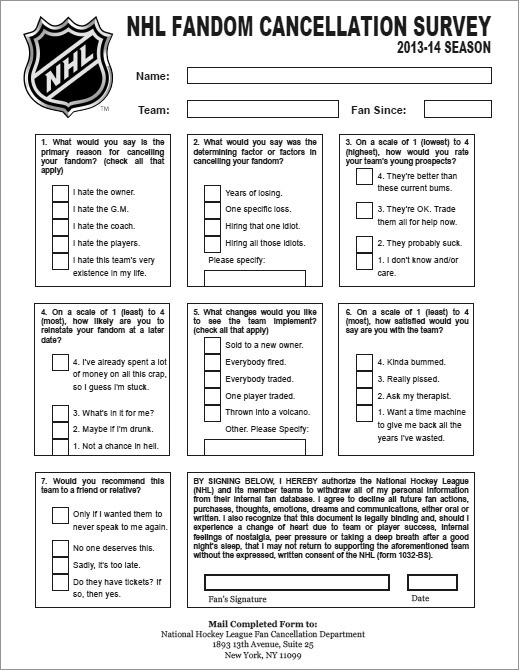 This is a satire. Please don't mail the survey anywhere. There is no 13th Avenue in New York City. Unless you count the Hudson River.