Failing to win two games in a row once again, Jack Capuano answers questions about consistency and we take a look at the teams ups and downs through 11 games.

Jack Capuano's New York Islanders are 4-4-3 through the first 11 games and have failed to win consecutive games in four attempts, eliciting that timeless frustration topic known as "inconsistency."

In some ways, the Isles are even worse than their record, as their special teams have helped prop up what has been a bottom-third level control of play at 5-on-5. The below chart, from data at the invaluable Extra Skater, tracks through the first 11 games their share of "Fenwick Close" (a proxy for possession, their share of game play at 5-on-5 when the score is close and both teams have equal incentive to score rather than one team having reason to go into a shell): 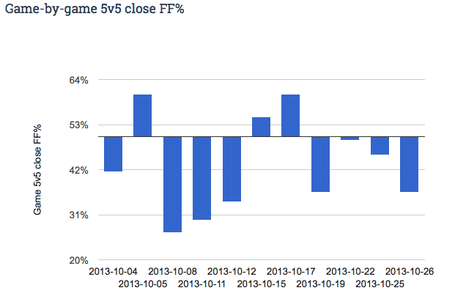 Granted, by this measure each game has varying lengths (and sometimes pretty small) stretches of play when it's 5-on-5 and the score is close, so I don't want to read too much here. (For example, the Islanders' good first period play after falling behind 2-0 to the Flyers would not be reflected here, because "score close refers to game situations where the score is either tied, or within one goal in the first or second periods.")

Still, you can see a general pattern where the Isles have been below water more often than not, with the clearest control against their weakest opponents. (Again, doing better against weak opponents would apply to most teams, but still...) It bears watching, as we're about halfway through the first quarter of the season.

Anyway, back to how the coach is handling their start:

Embedded above or accessible directly at IslesTV here, Jack Capuano answered questions about the whole consistency theme after Saturday night's 5-2 loss to the otherwise miserable Philadelphia Flyers. As usual, it's a mixture of coachspeech and repeat phrases but with some window into how the staff views things right now.

The Islanders have some players, they have some holes, they have some areas that need improvement that is within the capacity of their existing talent (you can even argue John Tavares is one of those areas, as he's been good but not stellar just yet).

It sounds like the coaching staff believes this, but they are struggling to get the team to deliver a full, cohesive, controlling effort on consecutive games.

Or in the sports vernacular: "consistency."