The Meet Your New Metro Friends tour resumes tonight as the team from the Raleigh-Durham metropolitan area visit the New York suburbs and the most fought-over parking lot on Long Island.

The New York Islanders and Carolina Hurricanes are in the amusingly Norris Division-like situation of battling for second place in the eight-team Metropolitan Division despite having unimpressive 3-2-x records.

After breaking a curse of sorts and sweeping the Hurricanes in 2011-12, the Isles were winless against them in three tries during last season's lockout year. As they adjust to a new reason for rivalry, this is the first of four meetings under the new format, a slate that is spread over the schedule in October, November, January and late March.

Both teams did not practice yesterday, so they had full morning skates today.

Evgeni Nabokov starts as expected for the Isles. In the revolving Matt door, Carkner is back in for Donovan, though Jack Capuano says that's not a knock on Donovan's play against the Oilers. Presumably they are looking for a little more defensive experience against the Hurricanes' dangerous forwards, as Donovan is still learning how to battle top NHL forwards in front of the net.

But I wouldn't read too much into the special teams battle. The Islanders' 5-on-5 possession numbers have been ugly thus far but different in the last two games against (admittedly bad) Buffalo and Edmonton.

Basically, none of these figures fully reflect who the teams ultimately are, but rather what they've done and how things have gone in the season's opening weeks. That might continue tonight of course, but I'd sooner bet on something like what we saw last season: Close games, dangerous moments created by the Staal line, unwelcome contributions from Jordan Staal -- and maybe an aggravating goalie moment.

For those interested in newer ways of assessing the game (you might call them fancy stats, or the maths, or in this case zone entries), garik16 posted (in comments) a look at individual players' offensive zone entry tallies through the first seven games. At its best, this tells you who has been best at moving the puck and retaining possession into the offensive zone (rather than dumping it in, which punts the possession question to a roll of the dice).

If you don't buy any of that, you can at least look at the data and conclude John Tavares is good at hockey (oh look: Frans Nielsen too!), and Travis Hamonic is indeed trying to carry the puck more. 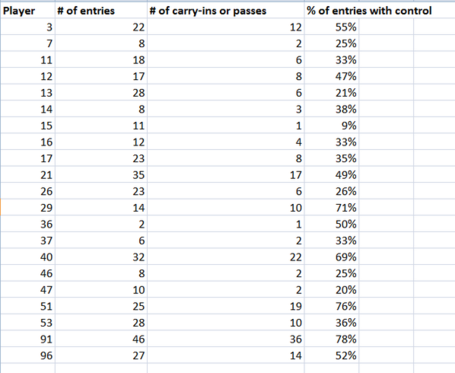 (The numbers in the left are uniform numbers, obviously.)