Zeitgeist: An Exclusive Look At Ryan Miller's No Movement Clause

Sabres goalie, former All Star and impending unrestricted free agent Ryan Miller is a popular trade target for many NHL teams. Too bad he's got an iron-clad no trade clause. And Lighthouse Hockey has obtained a copy of it.

Share All sharing options for: Zeitgeist: An Exclusive Look At Ryan Miller's No Movement Clause

As a former All Star, anticipated Olympian, unrestricted free agent and starting goalie for a rebuilding team, Sabres goalie Ryan Miller was going to play under a spotlight this season no matter what.

That spotlight got even brighter yesterday when The Buffalo News and Sportsnet reported rumors that Buffalo and the Edmonton Oilers had been "working on a deal" to swap Miller and possibly teammate Thomas Vanek for a package centering around struggling sophomore winger Nail Yakupov. While it's convenient to image two teams trading one problem for another, the proposal doesn't make much sense on many levels, mainly because Miller has put it in writing that he doesn't want to be traded to Edmonton.

In the 5-year, $31 million contract extension he signed with the Sabres in 2008, Miller included a complex No Movement Clause. In it, he stipulated certain criteria he expects the Sabres and whichever team acquired him to follow, including a list of teams he refuses to be traded to.

The other conditions in the original clause are also very interesting and provide some insight into Miller's plan for the rest of his career. Through a source, Lighthouse Hockey has obtained a (full color!) copy of Miller's 2008 No Movement agreement and is presenting it below. Perhaps with it, fans and media can further narrow down some actual realistic landing places for one of this season's most sought-after players. 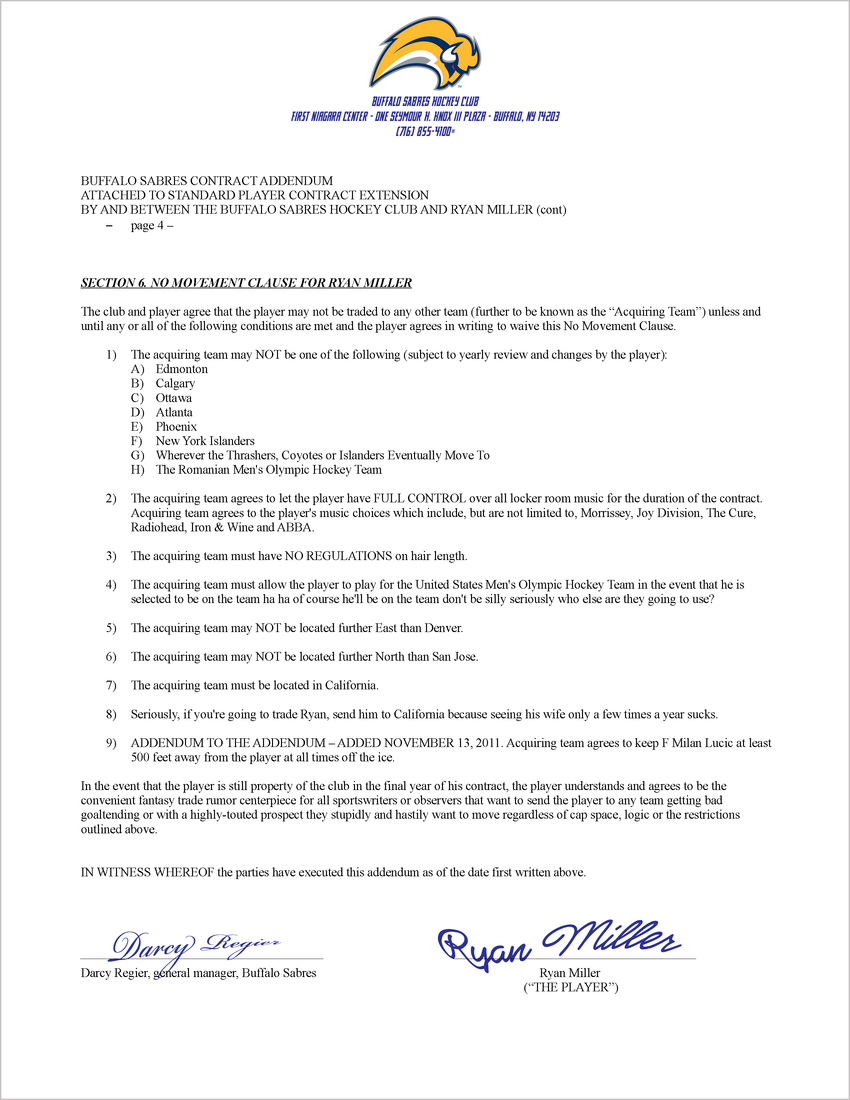 This document is not real, although Miller's desire to not play in Edmonton, be on a team closer to California and to let his hair run as free as the Mississippi are indeed true.