The Maple Leafs never got a chance to draft John Tavares and Brian Burke is no longer their general manager. But that won't stop Burke from continuing to cast his eyes on the talented centreman.

TORONTO (CP) _ As he strode across the visitor's locker room at Air Canada Centre, New York Islanders forward John Tavares found a wrapped package in his stall with his name on it. He opened the brown paper and read the note inside. He flashed a wry smile, looked the gift over once quickly then stuffed it in his bag.

The reserved star would have forgotten all about it if the throng of Canadian reporters following him from the second he arrived at the airport didn't immediately start firing questions at him.

What's in the box? It was a Toronto Maple Leafs jersey with Tavares' name and the number "1" on the back. And the giver: none other than former Leafs' GM Brian Burke.

"Caught me a little by surprise but it's a great gift and I appreciate it. I'll thank Mr. Burke personally," said Tavares, who was gracious and respectful. "I'm not sure why he gave it to me, but I guess I'll keep it. I grew up a Leafs fans, so, um, it's kinda cool."

The player and the executive are inextricably linked thanks to Burke's hubris leading up to the 2009 NHL entry draft. Holding the seventh selection that year, Burke was open in his desire to acquire the top pick specifically to bring Tavares to his hometown team. When the Islanders won the draft lottery and made it clear they were holding on to the first pick, Burke tried to make a make a play for Tampa Bay's second overall slot in the hopes of getting closer to Tavares.

Tavares has done everything the Islanders have asked of him and more. He's their most consistent offensive player, a leader in the locker room and a budding media presence. He signed a six-year extension with the Islanders in 2011, defying predictions that he would bolt the struggling club for a team people actually care about at his first opportunity.

Burke was fired as general manager just prior to this season resuming after the lockout. Although he kept his title of team president, he has not been seen around the Leafs' offices since his release and is thought to be stalking the Yukon fighting bears.

When asked if he would sign with the Leafs when he's an unrestricted free agent in 2018, Tavares was noncommittal. "I'm not really thinking about that now. I love Long Island, love the Islanders and I'm going to do whatever it takes to make this organization a winning one."

Tavares was effusive on speculation that he could become a Maple Leaf in the future, an annual "news story" for select members of the Toronto media. "Seriously, I'm an Islander, guys," he said. "Right now, my focus is on this team. Not the Leafs or any other team."

When his interest in joining the Leafs was gauged by reporters who make things news simply by virtue of printing it, Tavares didn't exactly say "yes," but didn't say "no" either. "OK, I'm gonna have to ask you guys to leave now. Please, just go. I have a game to get ready for."

UPDATE: While Tavares was stretching in the hallway outside the locker room, the note in the gift package was "obtained" by The Canadian Press and is included here in its entirety: 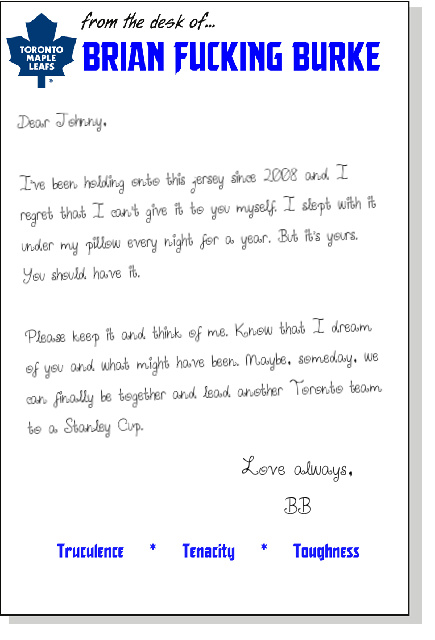 This is a parody. (Burke's actual stationary has a watermark.) Tavares is ours, Toronto. Hands off.