Zeitgeist: The Rick DiPietro Injury History is a Hoax

Rick DiPietro has been called "oft-injured," "fragile," "a health risk" and "a question mark." He's constantly missing time due to new and recurring injuries. But is that the whole story? Not even close. It's all been an elaborate and puzzling ruse.

Share All sharing options for: Zeitgeist: The Rick DiPietro Injury History is a Hoax

New York Islanders goalie Rick DiPietro, the stories say, has an injury history as long and as brutal as the Old Testament. A man with a lifetime contract that has played only 47 games over the last four seasons, DiPietro has been whipsawed between surgeries and rehab for the majority of his career.

Because it's all a hoax.

Here's what we know about Rick DiPietro (or is it Rick DiPietr'o?). He's a goaltender for the Islanders. He was drafted first overall in 2000 after racking up a haul of trophies in college including MVP of the Beanpot Tournament. He signed a 15-year, $67-million contract in 2006 that has been the butt of jokes ever since. And he has only played half a season's worth of games over the last four years.

But that's where the definite ends. From here, the rest of the story has more holes than DiPietro's hand-me-down goalie mask. It's a story as much about myth-making as it is about hiding in plain sight among a complacent and lazy joke-loving press.

Assembling a time line of DiPietro's injuries is easy because they're all on Wikipedia, which is always up-to-date and accurate.

March 23, 2007: A man fitting DiPietro's description and under the name "Richter Pietro" competes in that year's Alaskan Iditarod.

January, 2008: DiPietro supposedly injures his hip during the All-Star Game's Skills Competition. Wearing a microphone at the time, DiPietro is heard to tell someone "I just I f-ed my hip up again." Audio experts contacted by Lighthouse Hockey are "80 percent sure" DiPietro is actually saying, "I just signed up for zip lining. Wanna come?"

March, 2008: DiPietro announces he's having surgery on his hip, ending his season early.

June, 2008: DiPietro announces he's also having surgery on his knee.

July, 2008: The name "Rich D. Pietro" is seen in the closing credits of the summer's blockbuster film, "The Dark Knight" under the heading "Additional Stuntwork Choreographed, Performed and Shot by." 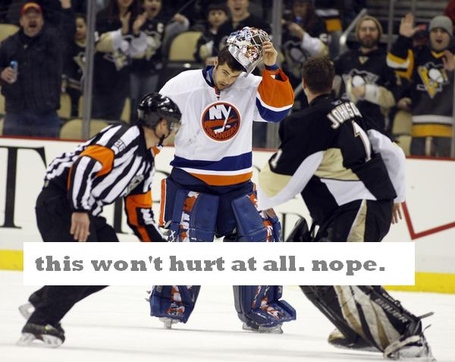 November 1, 2008: The team announces that DiPietro is having another knee surgery. Medical records obtained by Lighthouse Hockey show that no DiPietros were checked into any hospitals that day anywhere on Earth.

January, 2009: Islanders GM Garth Snow announces that DiPietro will miss the rest of the season due to swelling in his knee.

February, 2010: DiPietro sits out with "the flu" and is eventually shut down for the rest of the season with knee swelling. Doctors confirm that this is medically impossible.

May, 2010: The Center for Disease Control in Atlanta announces that it has begun researching the Umbrella Corporation's "T-Virus" and it's potentially harmful mutagenic properties. Rumors swirl that DiPietro is taking part in the experiments. No locals could corroborate if DiPietro was in Atlanta at this time because no one familiar with hockey or the NHL could be found there.

February 2, 2011: DiPietro gets into a fight with Penguins netminder Brent Johnson. Later that same evening, Pittsburgh news broadcasts report a story of an intruder dressed as a security guard assaulting a Penguins player underneath the arena. Johnson claims ignorance of the event and it's quickly forgotten. But a security guard's uniform covered in black and white fibers is seen in DiPietro's equipment bag as he heads to his "rehabbing assignment" for facial fractures and knee swelling.

November, 2011: DiPietro announces he's injured his groin and requires hernia surgery, shutting him down for the rest of the season. A source within the team tells Lighthouse Hockey that, on the weekend he was supposed to have his hernia operation, DiPietro was part of a group of players helping teammate Evgeni Nabokov move several large pieces of furniture - including two bookshelves, a roll-top desk and a chaise lounge - into Nabokov's temporary home on Long Island.

Rick DiPietro's words at the 2008 All-Star Game were not "I just f-ed up my hip again."

As of this writing DiPietro's stall in the Islanders locker room carries a quotation from a classic film about a man struggling to control his raging hubris while still staying true to himself:

Dr. Frederick Frankenstein: You know, I'm a rather brilliant surgeon. Perhaps I can help you with that hump.
Igor: What hump?

THIS IS A PARODY. FOR REAL, IT'S NOT REAL. But it's based on this story which is pretty amazing. If you haven't read it yet, you should.