When Lighthouse Hockey launched in 2008, it joined what was then just a handful of hockey blogs on a burgeoning blog network that hadn't even finished covering the "big four" North American sports leagues. As this site's founder and an Islanders blogger elsewhere, I was drawn to SB Nation's technology, robust commenting communities, and the quality of its existing sites.

Those three traits also combined to produce another: A vast virtual bar for sports fans, where you could banter and overlap with others from anywhere on the globe, no matter which teams and leagues you followed. It seemed ideal for New York sports, where allies in baseball are foes in football or hockey or basketball. Passion with respect is the rule.

In the next month SB Nation will be undergoing a dramatic upgrade to its platform and editorial process. The tone and camaraderie of Lighthouse Hockey will remain. But the seamless integration of content and user tools across the network will get a major boost, and our site will look different. As part of this "united" overhaul, each site will get a face lift -- including a new logo that underlines the integrated network of team-focused communities here. 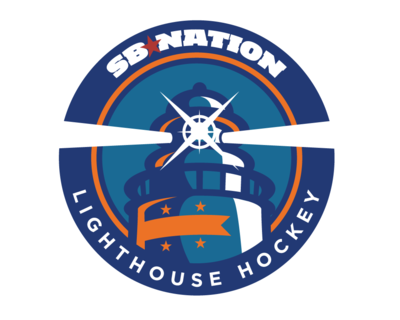 Here's a sneak peek at our new logo. (You can browse through all the new logos for the 300+ sites at sbnation.com/united.) With this look, when you land on an SB Nation site, you'll know it's an SB Nation site even before you get to the handsome writers. This subtly reinforces to fans that they can find the same type of great writing, video and conversation at all 300+ sites. (Also: Handsome writers. Except at Blueshirt Banter, of course.)

SB Nation's commitment to passionately follow sports will never end -- something instilled by Tyler Bleszinski, who founded this network and has watched it grow from his Oakland A's blog to a massive multi-sport, multi-nation network that not even SkyNet can stop. I think you can all appreciate his excitement in watching his baby grow and grow.

So thanks to all of you for visiting, reading, commenting, throwing tomatoes, inspiring (and then running with?) our Mark Lawrence posts or just lurking and making this site a worthy corner in SB Nation. Between all the teams we authors follow, we probably spend too much time jumping around SB Nation sites. If you're anything like us, we must thank you -- and apologize to your loved ones -- for doing the same.