Lockout Literature Presents: An excerpt from '50 Shades of Milbury'

An excerpt from the best-seller that's taken hockey book clubs by storm.

Share All sharing options for: Lockout Literature Presents: An excerpt from '50 Shades of Milbury'

An excerpt from "50 Shades of Milbury," the best-seller that's all the rage among hockey book clubs:

Apart from the paintings, the rest of the office is cold, clean, and clinical. I wonder if it reflects the personality of the Adonis who sinks gracefully into one of the white leather chairs opposite me. I shake my head, disturbed at the direction of my thoughts, and retrieve my questions from my jacket pocket. Next, I set up the digital recorder and am all fingers and thumbs, dropping it twice on the coffee table in front of me.

Mr. Milbury says nothing, waiting patiently - I hope - as I become increasingly embarrassed and flustered. When I pluck up the courage to look at him, he's watching me, one hand relaxed in his lap and the other cupping his chin and trailing his long, gnarled index finger across his lips. I think he's trying to suppress a smile.

Everybody knows me as a blustery, brash big mouth. A veritable force of nature. But for some reason, around this man, I am quivering pudding.

"Do you mind if I record your answers?," I ask him sheepishly.

"After you've taken so much trouble to set up the recorder, you ask me now?"

I flush. He's teasing me? I hope. I blink at him, unsure what to say, and I think he takes pity on me because he relents. "No, I don't mind."

"Good." I swallow nervously. "I have some questions, Mr. Milbury." I smooth a stray lock of hair behind my ear.

"I thought you might," he says, "and please, call me Mike." He's laughing at me. My cheeks heat at the realization, and I sit up and square my shoulders in an attempt to look taller and more intimidating. Pressing the start button on the recorder, I try to look professional.

After all, I am the general manager of the Toronto Maple Leafs. I have to remind myself of this.

"We're more alike than you realize, Mr. Burke. I see much of myself in you. We're both fighters - men not given to hiding our emotions. There's no need to be coy."

I swallow hard. The temperature in the room is rising, or maybe it's just me. I just want this interview to be over. And yet, I cannot stop myself.

"You went through some difficult seasons with the Islanders. Six years out of the playoffs. Lots of trades, lots of coaches. Do you think you were a bad general manager?" I stare at him, hoping he's not offended. His brow furrows.

He inhales sharply, and I cringe, mortified. Crap. Why didn't I employ some kind of filter before I spoke out? Damn my curiosity!

"No, Brian, I was not." He raises his eyebrows, a cool gleam in his eyes. He does not look pleased.

He cocks his head to one side.

"Why did you ask for this meeting?" he asks, his voice deadly quiet.

Hang on, who's supposed to be asking the questions here? His eyes burn into me, and I'm compelled to answer with the truth. It explodes out of my mouth.

"I wanted someone to talk to. I thought you would...understand."

His lips say nothing. His eyes say, "Go on. Share with me."

"My team is not well." My voice is weak and apologetic. "I've brought in players with grit and heart and truculence. I traded draft picks, lottery tickets really, for players that would produce immediately. I fired our coach. An old friend."

His face is hard, but strangely comforting.

"Mm hm," he says softly. "I have done all of those things. I traded or signed for every goon and veteran grinder I could get on the phone. I fired my first head coach, who was also my friend. Then I fired myself as coach. Twice. And prospects meant nothing to me. I traded a future Norris Trophy winner and captain of a Cup champion. And the goalie..."

I cannot speak but I feel a palpable current between us. We're sitting apart but slowing coming together.

"Have you made up any principals, guidelines or rules for yourself to follow regardless of what the common wisdom says?"

"Y...yes. I instituted a personal trade freeze for our team in December. And I wouldn't trade players at the deadline just for some draft picks." Even though I've said them a hundred times to the press, it feels like I'm speaking these lines for the first time.

"I once let my best player, a three-time 40-goal scorer, hold out for half the season, even though the rest of the team couldn't score a goal while standing in front of an empty net. And I called his agent 'a village idiot.'"

He speaks with no remorse. His conviction is mesmerizing. I straighten up in my chair as my pulse increases.

"Do you feel your goalies are adequate, despite what their stats say?"

"And have you fought with the press?," he asks me. I know he knows the answer. He's playing with me like a cat with a blind mouse.

"These guys in the media... said some things about me."

"Tell the truth, Mr. Burke." His voice is like an icicle shoved directly into my ear. "Don Cherry tried to turn an entire country against you. Said you only wanted American college kids and hated players from Ontario. How did that make you feel?"

"I wanted to kill that old fool." I can't believe the words spewing from my mouth. Who was I becoming?

"Ha!," he laughed. "I went to war with each and every member of the Islanders media horde during my tenure. But without me, there was no media. They covered us, no matter how bad we were. I was always the story. Like you.

"And now, I am the media," he says without a trace of humor in his smile. I look at him, and he holds my gaze steadily, impassive. My heartbeat quickens, and my face flushes again.

"I just let our goalie coach walk away. He may be the best in the game. He said some things about our team. Caught me off-guard and put me on the defensive. Did I make a mistake?"

"Never admit a mistake, Mr. Burke," he chuckles. Somehow, he knows everything I'm thinking at this moment. I can feel him inside my head.

"I fired the coach that broke our playoff drought, then watched him win one Stanley Cup and play for another. I still do not think of that as a mistake. Are you really going to be worried about one, little Frenchie goalie coach?"

I show him my ring from my Anaheim days. His face doesn't move. He's totally dismissive of my achievement, as if ascribing it to dumb luck.

I'm angry at him and my Irish blood is boiling. But I've never felt closer to any other colleague in my career.

"I just want to win so badly. And I've made some good trades, goddamnit! Great ones! I don't know why they can't..."

"I know you, Brian," he says. His words jolt my loins. My eyes fixate on his arrogant snarl. "I know that you always follow your gut instincts because you - and only you - know exactly what your team needs. And if everyone just left you the hell alone, your team would be unstoppable."

Why does he have such a hypnotic effect on me? His immobile, unchanging helmet of hair maybe? The way his eyes blaze at me? The way he pounds his calloused, neanderthal-like knuckles on the coffee table when he's making a point? I wish he'd stop doing that.

There's a knock at the door, and his blonde secretary enters.

"Mr. Milbury, forgive me for interrupting, but your next meeting is in two minutes."

"We're not finished here, Andrea. Please cancel my next meeting." 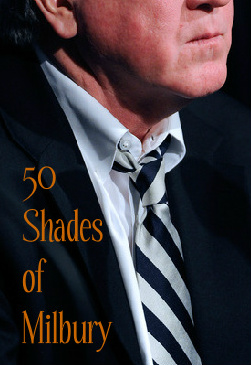 This is a parody. This book is not real. Thank god.