A long-lost sports business simulation that we wish could have stayed lost, Ice Hockey Lockout is no fun for anybody.

THE BAD: Terrible play control; confusing and frustrating gameplay with constantly changing victory conditions; lousy graphics, even for the era; contains no actual ice hockey; has only one musical track, which sounds like an out-of-tune rendition of "Lady of Spain."

Modern sports video games have come a long way from the unrefined, abstract pixel people that we once imagined were our favorite athletes or even, perhaps, ourselves. Where once we were happy to haphazardly control a rudimentary player on a blank field chasing a dot of a different color, today's sports video games offer not only unlimited control over players, leagues and rules, but are presented with incredible visuals on par with televised games featuring real people and personalities. To get any closer to these sports, you would have to strap on pads, get out on the field and feel the crushing impacts and physical exertion on your own body.

Unfortunately, despite its high-minded premise, ICE HOCKEY LOCKOUT is not a modern sports game.

Designed and published by failed fly-by-night developer InActivision, ICE HOCKEY LOCKOUT was a crushing disappointment upon its release in 1980. I'd like to say the game was a misunderstood triumph that was ahead of its time, predicting labor strife and contract negotiations between sports leagues and players associations that would torment fans for the next 30 years. But I can't.

The game is a poorly-designed, unplayable mess of programming. It's not fun or entertaining in any way, shape or form. It's buggy, broken, boring and boneheaded.

The game requires two players - one controls the hockey team owners while the other handles the players association. The object is to finalize a new collective bargaining agreement by negotiating terms such as revenue sharing, contract lengths, a salary cap and escrow payments. The problem is that ICE HOCKEY LOCKOUT makes this so difficult and so excruciatingly awful, that you may never want to touch it again.

Although in-game tutorials were not de rigueur when ICE HOCKEY LOCKOUT was released, the objectives of how to play or what's going on are never made clear. When first starting, users are presented with two characters in a room with ladders and platforms. Periodically, items will appear and the PA and owner characters have to scramble to collect them. The pick-ups could be TV contracts, player contracts, shared revenues or other hockey related objects, but you're never sure what you're running after or how it will help or hurt your chances of winning. 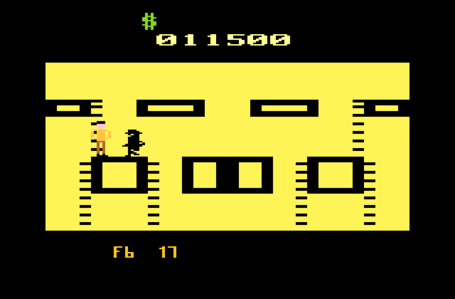 Meanwhile, there are two on-screen meters with mysterious purposes. A dollar amount at the top of the screen increases to enormous totals regardless of who has what in their possession. An "Fb" or fanbase meter at the bottom only rises or falls by a few increments at the end of the game. The starting points for both seem arbitrary and were different every time we began a new play session. 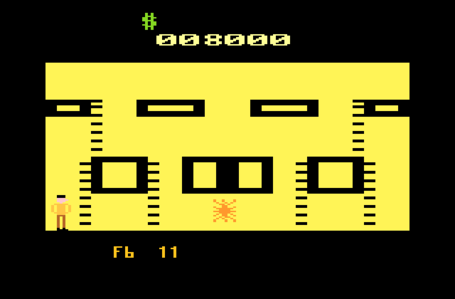 Once every few minutes, a UFO will fly across the top of the screen. If the player controlling the team owner can grab that UFO, he or she gets to compete in a mini-game in which they descend directly into the PA player's pocket to extract treasures from their opponent. Why there's a UFO in a game about sports contract negotiations is not explained. 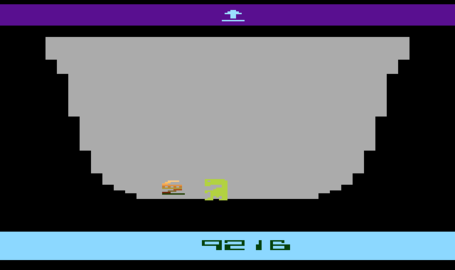 Even the instruction manual for the game offers no help. It includes charts, graphs, long explanations of sports economics, numbers on top of numbers and a ton of anecdotal minutia that only manages to create more aggravation. It mentions that the salary cap item is "tied" to the league's revenues, but I have no idea what this means or if it's even correct.

There's a rumor that the manual was written by a well-known hockey journalist at the time. If true, I'm sure he tried his best to make some sense of this confusing and contradictory game. But all the explanations in the world aren't going to sort out this mess out and make it understandable for everyone who simply wants to enjoy a game.

ICE HOCKEY LOCKOUT is one of the worst games I've ever played, bar none. Video games are supposed to be entertaining and fun. This was neither. It is embarrassing that a game came to be released in this state. I don't know what could have been done to save it. Probably nothing. There is no doubt that a sports business sim can be fun and interesting, and could exist on the cutting edge of gaming technology. But there's got to be a better way to do it than this.

And the most frustrating part is that, despite the title, the game does not include any actual ice hockey. Bummer. 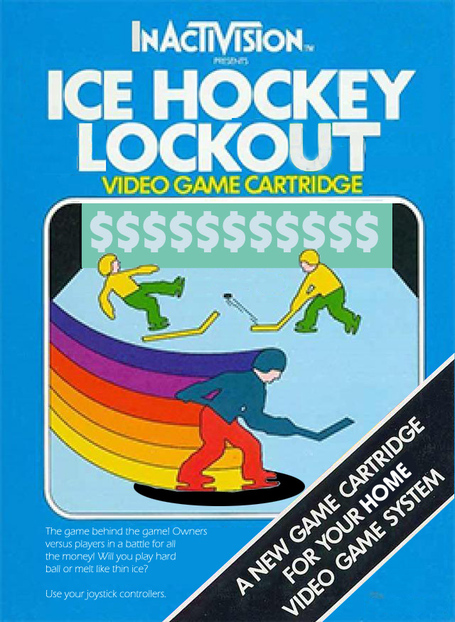 This is a parody. The first two screenshots are from a very real and very rare game called "Tax Avoiders." The other picture is from the actual worst game of all time. Visit AtariAge for all your Atari gaming needs. Apparently, some other hockey video game came out today.