MATAWAN, N.J. - A group of historians may have pinpointed the exact moment at which complaining about hockey viewership first began.

Scholars at the Matawan Historical Society recently uncovered a trove of perfectly preserved copies of the Red Bank Register, a long-defunct weekly newspaper from a nearby township. Within the May 25, 1898 issue is a report from a screening at a lesser-known, out-of-the-way playhouse in New Jersey of Thomas Edison's "Hockey Match on The Ice," the first ever recorded film of ice hockey.

"Immediately after the movie was over there was grief about how no one was watching," said Chaz Avery, the Society's junior assistant director of acquisitions.

"Whether it's doom and gloom, complaints about the venue or offering specious ideas for how to 'fix' the viewership problem, grousing about lousy hockey audiences goes back over a century. Maybe longer," Avery said. "This truly historic uncovering of early bitching could potentially change the future of the sport, of the NHL, of television and of every cranky, wet-blanket know-it-all across the continent. We're moderately excited."

The artifact, pictures of which are included after the jump, will be on display at the Historical Society until July 1. Attendance is not expected to be very good. 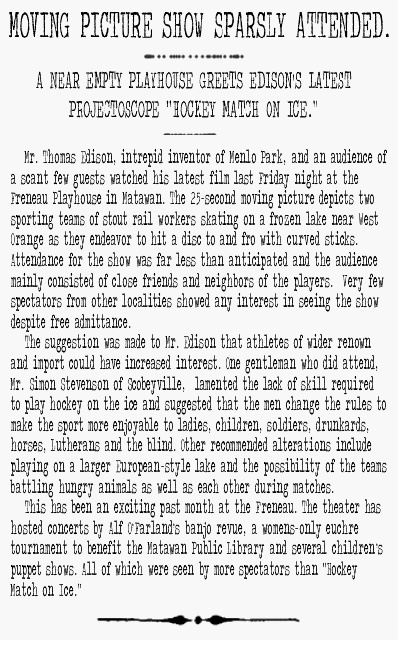