The news is still difficult to digest, still nearly impossible to comprehend. Why would an athlete at the top of his game suddenly step away from the sport he has dominated? Why stop a well-oiled machine as it's firing on all cylinders?

Trying to understand another person's heart is a fool's errand. We all follow our own convictions and travel the paths we feel we are destined to traverse. While others judge our decisions through the prisms of morality or legality or their own personal beliefs, the only compasses that can guide us are our own.

I don't know why the Fat Guy from NES Ice Hockey has decided to step away from the game that has given him everything. As mere fans, we can only read the words the man himself posted on his official Facebook page (see below) and wonder what was going through his head.

But hockey, as always, will go on. Sadly, it will be a little bit less fun than it was before. 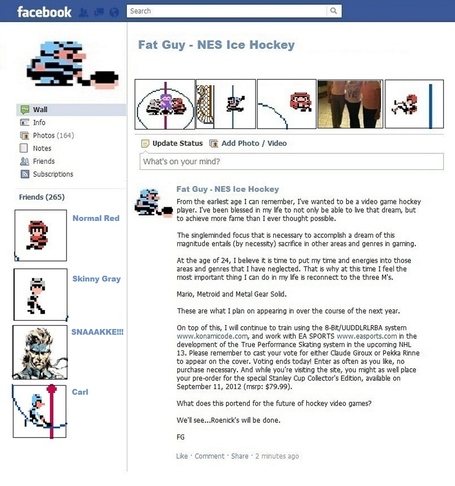 It's a parody, people. I mean, it's not like an actual NHLer would just up and step away from the league while he's still on top. That's crazy talk.