It appears the IIHF's power rankings are 10 tons of clever (which makes them a negative-10 on The Burnside Scale of pithy power ranking put-downs).

That's how you get Switzerland's current description as: "Yo, any other former Soviet republics want a piece of this?" It's like some Euro disco form of power rankings.

We've captured a few (and by the royal "we," I mean Keith) in this post. But you can actually see how they were in previous eras -- here is the version at the end of the 2011 WC.

Anyway, the U.S. lost to Slovakia today, 4-2 (Kyle Okposo had an assist). There are two big NHL playoff games tonight, chronologically staggered for your viewing pleasure. This is your watch thread. Our slogan is "Better than Iceland, worse than Sweden." 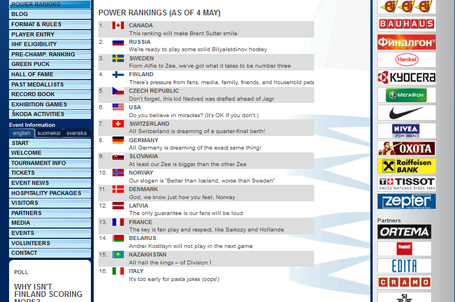 Switzerland: "All Switzerland is dreaming of a quarter-final berth!"

Germany: "All Germany is dreaming of the exact same thing!"

Power ranking guy: "All your rankings are belong to us!"