New York Islanders winger Matt Moulson had a career season in 2011-2012, setting a new high in goals scored (36) and points (69). But his play on the ice is only one positive way in which Moulson represents the Islanders.

In the last two weeks, he has been named a finalist for both the Lady Byng Trophy as the NHL's most gentlemanly player and the NHL Foundation Award for his tireless work with the Wounded Warriors program, as well as establishing the 326 Foundation with his brother-in-law, goaltender Jonathan Quick.

Moulson also took home a pair of team awards this season; the Islanders Community Service Award and the "Good Guy" Award as chosen by the Long Island Chapter of the Professional Hockey Writers of America.

The nominations haven't stopped rolling in, and not just from the hockey world.

Moulson has gained recognition from several organizations for his play, his personality and his perseverance. Here is a handy and ever-growing list of Moulson's recent accolades:

Won - An O. Henry Award - for his short story, "The Tell Tale Playoff Beard," about a man who sells his soul to the devil for a shot at the Stanley Cup only to be choked to death by his own facial hair.

Nominated For - A Kennedy Center Honor - for his lifetime achievements in interpretive fist-pumping.

Nominated For - An Oscar for Best Supporting Actor - for his performance in the role of "Centipede" in Paramount Pictures' Top Gun 2: The Wingman Always Scores Twice.

Nominated For - A Grammy for Best Contemporary Solo Performance Male or Female - for the song, "Pass to Me (I'm Open) (featuring Rihanna) (Rick Rubin Mix)(7" Version)" 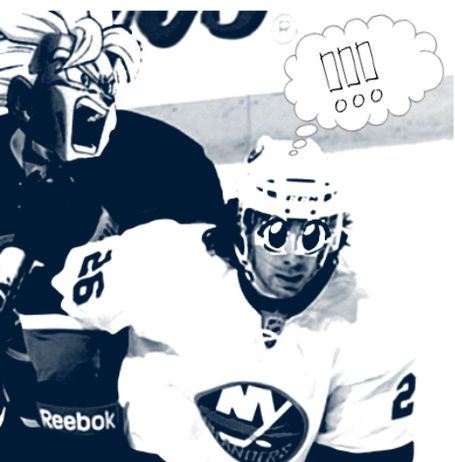 Nominated For - The Ontario Golden Jubilee Award for Civilian Bravery - for being an Ontario-born hockey player with the unprecedented strength, fortitude and gumption to play for an NHL team not called the Toronto Maple Leafs.

Nominated for - A Nobel Peace Prize - for his leadership in shepherding and nurturing Islanders rookies through immensely difficult struggles such as paying for team dinners, wearing embarrassing outfits and being noobs during team Call of Duty 4: Modern Warfare matches.

Nominated for - The Presidential Medal of Freedom - for swiftly coming to the aid of assaulted teammate Kyle Okposo in a game against Calgary on Dec. 29, 2011. This act of valor could, ironically and tragically, cost Moulson in his candidacy for the Lady Byng.

Nominated for - The Horatio Alger Award - for pledging his unyielding dedication, commitment, honesty and character to the New York Islanders, an organization that could really use more of all of those things.