Let us compare for a moment the first five games of Al Montoya's NHL career with what might be his last five NHL games for quite a while:

I am loathe to rip a goalie when his team lost by four to the 30th-place team on the final game of the season, but my goodness. Been waiting for one sign of Good Al in these final weeks, but none emerged.

Granted, this was a ridiculously wide-open 7-3 game of meaninglessness, the shots 21-15 for the Isles in the second period alone. Problem was the Blue Jackets scored four goals on their 15 shots in that period while the Islanders put just two past Steve Mason on their 21.

By my count at most two of the total seven goals allowed were unstoppable (one of them a James Wisniewski one-timer blast on a 5-on-3 powerplay). It got crazy, or crazier after 5-2 in the second period, and the Isles' game fairly fell apart to follow the goalie's lead. 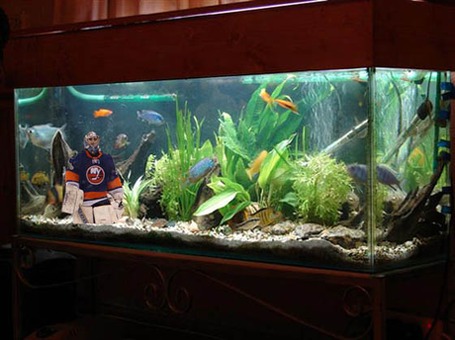 a KQ and ICanSeeForIslesAndIsles joint

What an ugly finish. I feel bad for Montoya, but his play to finish out the season after Evgeni Nabokov got hurt has been atrocious, allowing three or more goals in five of his eight starts. For a guy that finished last season strong (.921 in 20 games) and started off this season well, to see his season save percentage fall well below .900 is jaw-dropping.

Not to distract from an ugly loss or pile on Montoya, but this was all fairly meaningless but Montoya is one of the few guys, thanks to his injury layoff, who had something on the line in these final weeks. He finished last year as a feel-good story; he finishes this year as an enigma.

Meanwhile, we'll see you for Tuesday's draft lottery as well as season report cards and monitoring the Bridgeport playoff push. On that note, the Sound Tigers lost tonight and took some injury hits:

So after Ullstrom and Landry go down and DiBenedetto gets late instigator, could be good thing they get 2F and a D back from the NHL

Well, they'll get that. Also: Brock Nelson debuted tonight and played some at center.

On to the kids, and to the report cards.