The scariest moment of a roller-coaster 5-4 New York Islanders win was P.A. Parenteau suffering an ugly but apparently not-worst-case injury [video] in the second period. Thankfully for the pending unrestricted free agent, the first report from the team is an ankle sprain rather than a break or tear or demolition of his leg as it first appeared.

The fun stuff: The Islanders grabbing leads all night, then giving them back. As you might gather from our photo illustration courtesy of Mike L. (ICanSeeForIslesAndIsles at LHH), Al Montoya wasn't exactly a wall in that effort, but he made a fine tank.

Also fun: Michael Grabner scored on a breakaway. No, really! Well, actually it was a penalty shot, one awarded on a soft call. He shot to Chris Mason's stick side, just inside the post, lending credence to the theory that in normal breakaway situations -- with defense chasing -- his hands can't catch up with his feet.

Grabner also scored the game-winner, a pretty change-of-speed-and-direction deflection of Travis Hamonic's point shot. If you were rooting for a loss for draft lottery purposes, Grabner and Kyle Okposo conspired with a pair of goals each to deny you. Matt Moulson started things off with an absolute snipe over the shoulder from the far side of the faceoff circle.

Montoya wasn't just a victim of some tough breaks and some poor plays -- one shot deflected off Milan Jurcina's skate to go five-hole, another to tie it late fluttered through his arm. He also had the misfortune of poor timing:

Since returning in March, Montoya has given up four goals or more in four of his seven starts, prompting MSG to run a, ah, curiously titled graphic: 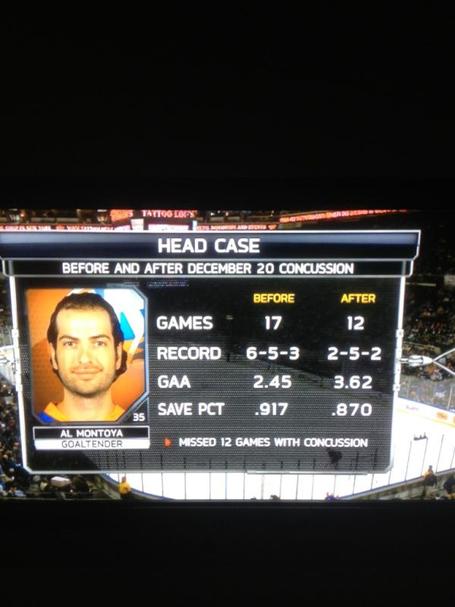 As for the other Islanders goals, Kyle Okposo's first was buried into a wide-open net after the Islanders completed the kind of passing that happens when both teams are playing late-season shinny. Okposo's second was a fine snipe after an excellent spin-and-pass from John Tavares, who logged two assists to pass Parenteau for the team lead.

It Must Be His 1000th Game: Congratulations to Steve Staios for playing and surviving his 1000th NHL game. Full family on hand for a nice ceremony. To celebrate, the frequently penalized defenseman actually drew two penalties on the same shift. Blake Wheeler, the guilty party, was in such disbelief that he sat on the bench and refused to go to the box until his fit was over.

Thus concludes the home stretch of the schedule, with the Isles finishing just 17-18-6 at the Coliseum. (They could have the same record on the road with a shootout/OT loss in Columbus Saturday.)

In lottery land news, Carolina defeated Montreal in a shootout, meaning the Hurricanes stay ahead by a point and the Canadiens can no longer catch the Isles. League-wide, out West other games still going as of this posting could affect things. Toronto won in OT, too.

For lottery slotting purposes, the Isles can now only finish 4th through 7th. But the lesson for all you lottery-loving tanksters out there: Beware the lottery, as it can change everything.

Oh, and in other games, John Tortorella had this to say about the Penguins:

"It's one of the most arrogant organizations in the league. They whine about this stuff all the times and look what happens. It's ridiculous, but they'll whine about something else over there, won't they? Starting with their two (bleepin') stars."

Presumably Parenteau is out for Saturday, but you never know. Either way, get well soon P.A. Hope you're around for more.