The Philadelphia Flyers gave up the first goal of the game for the ninth consecutive time, but that 1-0 lead courtesy of Josh Bailey just 1:35 into the game would last only eight minutes and be the New York Islanders' only lead of the night.

Stuck for offense recently, the Flyers threw pucks at Evgeni Nabokov's net and got exactly what they needed in the first, second and third periods.

For the Islanders, with Nabokov having a night without headstands, the most interesting development was Josh Bailey picking up two more goals from the right wing side, and Casey Cizikas -- the callup who has ostensibly bumped Bailey to wing -- getting his first two NHL points.

The Islanders powerplay came up flat and empty, though a late timeout with Nabokov pulled led to some uncharacteristically organized 6-on-5 pressure before Sean Couturier bounced an empty-net goal off of Andrew MacDonald to extinguish any remnant hope.

The game certainly turned on that first period lead reversal: The Islanders outchanced the Flyers in the first period -- Bailey could have had two or three in that period alone -- but an easy deflection by Matt Read tied it at 1-1 halfway through the period, and a late Flyers powerplay caromed a puck off Nabokov's left post, off his body and in 50 seconds before the first intermission.

With the Isles continuing to pressure after Bailey's opening goal, Peter Laviolette called timeout just 3:45 into the game and the Flyers tightened things up. The Islanders would not outchance the Flyers in either of the remaining two periods.

Bailey the Winger? Well we speculated about Bailey's ability and tendency to open up a shot breaking in from the right wing -- almost a reverse Blake Comeau, without the tendency to orbit the zone -- but no one would expect Bailey to get three of the Islanders' next four goals immediately after that move. Something to watch. Bailey's second goal, on another fantastic passing combo from Streit and Frans Nielsen, tied it 50 seconds into the second period.

Casey Sets Them Up: Two frankly fantastic assists from Cizikas tonight, first to set up Baily after very nice pinching work by Mark Streit, then to set up Kyle Okposo for a one-timer similar to Okposo's first NHL goal four seasons ago.

Reasoner: Underrated and perhaps unnoticed play by Marty Reasoner to save a goal in the first, when he checked his open man at the doorstep rather than try to make a play on the pass headed to that man. Would have been an easy tap-in otherwise.

Uncharacteristic Hamonic: Travis Hamonic surprisingly gave too much space to Read on the Flyers' first goal, allowing him to curl to the front of the net unimpeded to easily redirect the shot from the point by Nabokov, who was playing out of the net at a more Montoya-like distance. (Later, with the Flyers clearly throwing the puck at the net from everywhere, Nabokov was beaten while playing back at his more customary position deep in the crease.)

Milan the Menace: Milan Jurcina went on a cannon-blasting frenzy in the first, and he ended up breaking James van Riemsdyk. According to the Flyers broadcast, the shot JVR blocked with his left skate broke a bone in the foot/ankle area. Tough season for JVR, another tough injury break for the Flyers, who are beatable without Chris Pronger.

Speaking of Jurcina: It's funny, he takes flak -- as he has at every stop in his career -- for not using his size often enough to deliver hits, but the man does deliver hits. Mark Eaton? That guy does not hit. I know, it's not an important part of his game, but there are times where a little rubbing out along the boards would go a long way.

Slow to Get Back 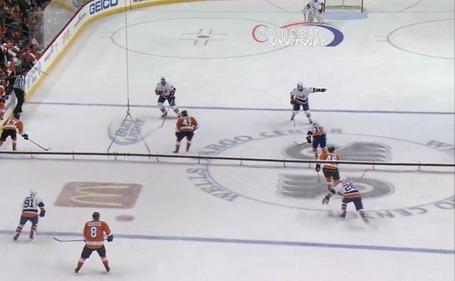 Pssst, hey P.A.: Mark Eaton is pointing to your guy.

If the killer goal was Jaromir Jagr circling the net and throwing a low backhand that caught Nabokov in between post-hugging and butterfly, the full demoralizer came under a minute later when all three members of the first line were lazy on the backcheck.

As pictured above, P.A. Parenteau was perhaps most guilty of the three, failing to identify and then catch up with the goalscorer Read -- that's Mark Eaton pointing to Read, off screen -- but Matt Moulson and John Tavares were also slow to get up ice and provide any backside pressure. Wayne Simmonds, carrying the puck in the above screen shot, made a sweet cross-ice pass to Read. That will happen sometimes after an offensive line makes an unsuccessful push for a goal and play goes the other way, but it was just a 30-second shift for them, and the result was a two-goal lead the Flyers would never relinquish.

Long Shots: Only the just-mentioned goal by Read and the empty net goal did not start with long shots -- the throw it at the net and good things happen theory. That's how it goes sometimes, but the Flyers were simply sharper at capitalizing on creating and finishing that situation.

A 6-on-5 Plan? We've complained in this space not about the Islanders pulling the goalie early, but pulling it without much cohesive pressure afterward. Tonight was different, as they pulled with 2:16 left and Scott Allan ran through instructions on the bench. What followed was a little more organized, and a little more pressure before Couturier finished it off 1:43 later.

Jaromir the Ageless: Jagr is in the top 10 of NHL scoring all time. Imagine if he hadn't taken a KHL sabbatical?

The New Lines: Still like the new lines though, just two games in. The first line was held off the scoresheet, yet the Islanders saw the proverbial and elusive "secondary scoring" for the second game in a row. At this point, with the eighth playoff seed sprinting out of reach and this road trip now at 0-2-1, things like that are what we're looking for through the final five weeks of the season.