Last night's 45-save + 2 shutout of the Flyers was pretty amazing for Evgeni Nabokov, the old dog. But food for thought: Don't judge Nabokov's future based on that game or his past two weeks.

Al Montoya was crowned by fans earlier this season, and Dwayne Roloson was crowned a couple of times over the past two years, and Yann Danis was -- well, never mind but you get the point. I'm doubtful that a meaningful trade opportunity will open up with the goalie market being what it is, but it's the GM's job to at least probe those waters and evaluate his options.

The goofy thing about the Islanders goaltending this year is no one has played enough games for us to really know what they offer, but Nabokov has suddenly played half of the 52 games thus far so his on-ice importance has grown. You're starting to hear people discuss his value on the roster now vs. his value as a trade chip (with a no-trade clause) in a weak market of unknown demand.

Still, while the Islanders jumped to 11th in the East last night, the four teams behind them area ll closer to them in points than the Isles are to the 10th-place Jets. With Travis Hamonic out for two weeks and Dylan Reese's injury last night looking at least that serious, Nabokov or his net mates will probably need to put up more performances like last night for the Islanders to keep hope alive at the Feb. 27 trade deadline.

There are claims that the trade market prices are soaring [USA Today .. .also with recent deadline deals] and claims that Nabokov's trade value is skyrocketing [PHT], but it's really in the eye of the beholder, isn't it? If the last week were truly enough to change some goalie-poor GM's mind -- and there aren't many of those -- then next week could change it back, could it not? Sell high ... if you have a buyer.

Anyway, my own reservation about the making snap decisions isn't just about trades, it's about the idea of an extension for Nabokov, which bandied about by some fans. Any such talk, whether to trade (and waive his NTC) or discuss re-signing, turns on private conversations we won't see. We'll only know the outcome in about 20 days.

About Last Night: The Game

CSN Philly has the Flyers praising Nabokov, and Laviolette on the contrast from the last meeting: "From the last time we played the Islanders where we gave up too many chances and shots, we were able to close it down a bit."

"They were all decent and quality shots," Nabokov said. "Sometimes you get a rebound, a weird bounce and they go in. That is just the way the game is."

update - in that spirit, and the spirit of the meme discussion in a prior thread: 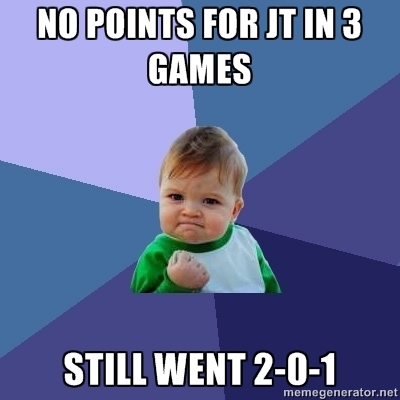 About Last Night: The Extension

If you missed it, word leaked last night of Frans Nielsen agreeing to a four-year, $11 million extension. A formal announcement is planned today.

Newsday has a quickie with a statement from Garth Snow on how this fits.

Puck Daddy had nice things to say about this and the other core contracts the Islanders have assembled.

Edmonton blog the Cult of Hockey also liked the deal for the "Selke candidate" -- and I'm going to warn doubters who focus too much on Nielsen's point totals: There will be plenty more praise like that. This isn't even about a player who is something of a cult favorite here (which is in part just for fun), it's about evaluating areas of the game that don't show up on the back of a hockey card.

That CBC game recap link in the previous section also had Frans Nielsen on his extension:

"I'm proud to be part of it for another four years," he said. "They have treated me so good here and I can't wait to be contenders again."

Why Did the Turtle Cross the Road?

This is neither here nor there, but...

While surfing post-game reactions last night I stumbled upon references to the Steve Staios hit on Maxime Talbot of two Islanders-Flyers meetings ago, which I'd almost forgotten about because the deeply wounded Talbot missed nary a shift nor game, and I remembered how clearly Flyers thought the incident was an "elbow" or headshot when the replays were frustratingly inadequate and thoroughly inconclusive for what began as a shoulder check. Those memories reminded me of the lesson I learned that night:

It's true what they say, how you can have two witnesses to the same car accident report completely different things.

In fact you can have those those witnesses watch slow motion replays of the same car accident from multiple angles and still report completely different things. And if one car is blue and the other is black then all bets are off, particularly if the blue car is just a benign old compact and the driver of the pretty black car just sped through a red light and stopped, stumbling out grabbing his neck and slumping to the pavement in the fetal position.