The last time the Hurricanes and Islanders played, it was a tight contest which anyone could have won (despite the 5-2 EN inflated final total). In that game John Tavares had the game winner, finishing the night with 2 goals and 4 points. Tonight it was JT again with the game winner and the first star for his 2 goal, 1 assist performance. Meanwhile the demoted and almost immediately promoted PA Parenteau got two more assists (41 on the year, 5th in the league) was second star of the night.

These last two games really show where the team is at. Most nights they can't keep up with the better teams in the league, unless they get a lot of luck. But they are competitive with the other teams in the playoff bubble. There might be little solace in that for some, but the team is taking the baby steps in the right direction. Of course it also helps when Jeff Skinner misses a shot with his whole side of the net open in the waning seconds of the game.

The win puts the Islanders back at NHL .500, and gives them a clean sweep over the Kirk Muller coached Hurricanes. Although Parenteau was quickly returned to the first line with JT, Kyle Okposo did bounce around a bit. But he did connect with Micheal Grabner on an absolutely beautiful wrist shot that went right through Cam Ward to give them the early lead.

Two Carolina goals followed and you could hear the groans already in the Coliseum. Within four minutes of the second Carolina goal was JT tying the game with his first goal. Probably the best moment of the night came a few minutes later after a penalty on Carolina's Tim Brent. The Islanders got into the offensive zone and showed some beautiful cycling as JT and Parenteau assisted on Frans Nielsen's PP goal to take back the lead.

Jaroslav Spacek (from Eric Staal) scored his 3rd goal of the year to tie the game again for the Canes. But it was not to be for them, as Muller pulled Cam Ward going into the 3rd period. Justin Peters proceeded to give up a goal to JT not even a minute into the period on a wild scramble for the puck in front of the net. The Canes proceeded to get 12 shots but nothing got past Kevin Poulin, despite Mark Eaton's best efforts to snow angel the puck into his own net.

I was kind of surprised how quickly Capuano went back to PAP on the first line. When PAP has a multi-point night the team is 13-3. They are 6-9 when he has a single point and 5-19 when he's pointless. With rumors that Ken Morrow was scouting the Kings - Flames game tonight (two teams who don't need a goalie) hopefully PAP isn't on the trading block.

No Foolin' Poulin: Poulin had a good outing, but I still wouldn't want to have to rely on him full time at the NHL level. I think it's best for him to finish the season at BP, and then work with Sudsie during the offseason and camp. On the bright side his SV% has improved in each game this year, going from an .897 to .906 and tonight's .913. The worry isn't that the Islanders might trade Evgeni Nabokov and Poulin backing up Al Montoya. Instead the worry is that the Isles trade Nabby and Monty gets hurt again, requiring Poulin to start a long stretch of games.

Can We Have Hamonic Back?: There are no words for how bad this defense is without Travis Hamonic in the lineup. Steve Staios does not click with Mark Streit at all, meanwhile the Mark Eaton and Milan Jurcina makes me miss the Zdeno Chara and Eric Cairns pairing of the 99/00 Islanders. Ty Wishart is really in a no win situation, and seems to be the second coming of Jurcina. We commonly call Nielsen one of the most underrated players in the league, but I think Hamonic might deserve that recognition soon.

The Gritzzzzzzzz: At the end of the game Jay Harrison took a shot after the buzzer. Matt Martin took exception to it and a small fracas ensued. Harrison was given 2 for unsportsmanlike conduct and a 10 for misconduct, with Martin getting 2 for roughing. Always nice to see everyone standing up for the goalie, and Martin on the ice during crucial moments instead of Brian Rolston or Jay Pandolfo.

Playoffs: The Leafs got blown out, so the Isles are within 6 points of 8th right now.

Ice Time: Andrew MacDonald led the team with 24 minutes, with Streit, Tavares, Moulson and Parenteau all at 22 minutes. Nino Neiderreiter was at 7 minutes, and his linemates Pandolfo and Reasoner were at 9ish on the night. Aaron Ness was the lowest among the defenseman at 14 minutes, while there was very little seen of Rolston who finished the night with just 11 minutes.

Speaking of Rolston, during the game thread we had some more fun with the meme generator: 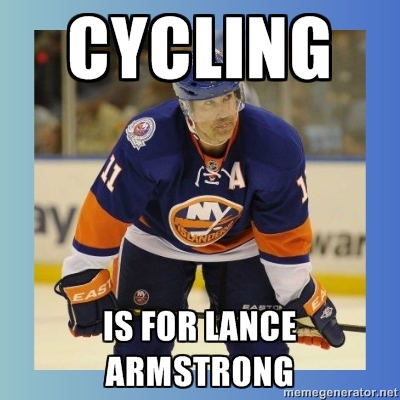 Also my favorite quote of the night from the game thread from Garik:

"Can't take the goaltender out with the puck in his zone"

Next up are the Senators on Monday and the Sabres on Tuesday. With SportsClubStats giving the Islanders between 5 and 8 losses at most to make the playoffs, every game is important. But these are two teams the Isles should be competitive with, and two wins that could pull the team even closer to 8th. At the very least the two wins would finally give the team a bit of a cushion to stay above NHL .500 for a while.