The NHL and NHLPA don't want to tell us where they're holding their latest CBA meetings. Fine. We'll find them on our own.

While fans and media approach these meetings, which represent the longest single time the parties have spent at the negotiating table during the lockout, with a mix of optimism and caution, the one thing everyone wants is to know where the meetings are taking place.

The problem is, New York City is big. Really big. Those meetings could be happening anywhere.

With this in mind, scientists and researchers at the Lighthouse Hockey Institute using the most sophisticated equipment, techniques and tactics both legal and controversial (not to mention a dash of good old fashioned street smarts), have boiled down the possibilities to a few of the most likely locations as well as the key reasons why.

The handy image below contains the fruit of their labors and may shed some light on these highly important but secretive rendezvous that could end the latest NHL lockout. 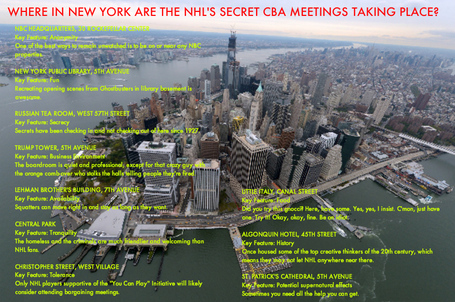