While locked out of the NHL, Islanders goaltender Evgeni Nabokov dispenses advice on life, love, hockey, animal husbandry, astrology and anything else he's asked. This week, Nabby helps readers with coming-of-age questions and concerns about adulthood. 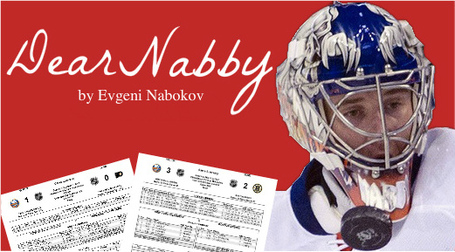 Elmo is confused. Elmo's friends and co-workers have been acting strangely around Elmo lately and Elmo doesn't know why. Whenever Elmo asks someone about it, Elmo is told that Elmo wouldn't understand and that it's a grown-up problem that Elmo shouldn't worry about.

Elmo's question is, when will Elmo be old enough to understand grown-up problems? After all, Elmo is 40-years-old.

In my career as a goaltender, I've often had to wait my turn to play. My best advice is to stay focused, keep practicing and be prepared to get on the ice at any time. You never know when the guy with the hot hand suddenly hits a cold streak.

My husband I met several years ago when I moved from Arizona to Washington State. After we first met, I found out he was a vampire, teamed with him to kill another vampire, watched him leave town, teased and became BFFs with a werewolf while he was gone, got back together, destroyed an army of revenge-seeking vampires, got married, became a vampire myself, had a half-human/half-vampire baby, gave her a stupid name and saved her life by convincing a second group of revenge-seeking vampires that she wouldn't kill them a few years from now.

My question is, what are the best hors d'ouvers to serve at a werewolf/vampire dinner party?

Living and working with a diverse group of teammates can be difficult. Just remember that every player has a role and you've got to have each other's backs. Also, I recommend serving what we call in Kazakhstan Сосиска в тесте, or as you know them, "pigs in a blanket."

I've contacted Twitter support, as well as Microsoft, Google and Apple and no one can seem to help me. On Sunday, my Twitter timeline was full of tweets about something called the "Grey Cup." I have no idea what this is and I'm frightened.

Is this "Grey Cup" a new computer virus? And, if it is, do I need to tell my dad that I was using his new iPad mini without asking first? Also, what does all this it have to do with the movie "Argo?"

Sticking to your fundamentals is very important for goaltenders. Work with your coaches on new techniques, but always remember the basics because when the game gets tough, your reflexes and muscle memory can bail you out. And I think the "Grey Cup" was won by these guys.

Not actually written nor endorsed by Evgeni Nabokov. I heard he doesn't even like Сосиска в тесте.