Before yesterday's trainwreck of a CBA meeting, word on the street was that the NHLPA was going to present the owners with four possible proposals for a new collective bargaining agreement. But when the dust settled, the players only presented three new deals. So what happened to the fourth proposal? Well, it's here.

Prior to yesterday's less than encouraging collective bargaining meeting, word leaked out via Twitter that Players' Association executive director Don Fehr would be presenting not one but four possible counter-offers to the league's proposal from Tuesday.

When commissioner Gary Bettman took the podium after Thursday's powwow, he referred to three proposals from the PA, not four. However many deals the players put in front of the league, it didn't matter because the owners took their puck and flew back to New York before even hearing what Fehr had to say to the media throng.

But what happened to the alleged fourth proposal? Was there an real, on-paper plan or was the wrong number simply the product of a hungry media and an overzealous former player? After some (but not a lot) of investigation, Lighthouse Hockey has the answer.

Below is an actual copy (on official NHLPA letterhead) of the Players' Association's fourth proposal obtained through one of our sources deep within the league offices. Whether it was actually offered to Bettman and the owners or it was benched at the last second is unknown. But it is presented here to the hockey-starved public for the first time.

The NHLPA's mystery fourth proposal may or may not have saved the 2012-2013 season. The question is whether or not it even got a chance to try. 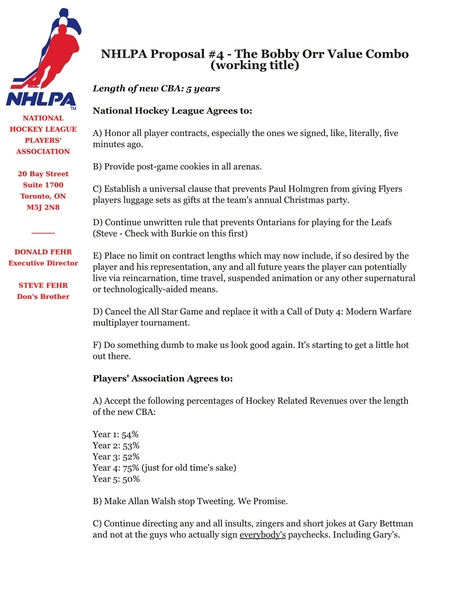 This is a parody. I sure as hell hope the PA's letterhead is fancier than this.