It's been a couple of years since the Islanders have had a participant in the actual NHL all-star game [Full list here complete with injury and petulance replacements]. Michael Grabner was invited as a rookie for the skill challenge last year, but prior to that, you'd have to go back to Mark Streit in the '08-'09 season for participation in the all-star game itself. John Tavares is now beginning what Islanders fans hope will be an annual rite of passage that he can blow off in a few years when he's tired or suspended.

In light of the achievement, I've personally decided I'll watch the game this year and Mark and I decided to run a mock draft of the participants to get our inner GM on. [*Disclaimer, both GMs have limited knowledge of some of the players on our squads, did not look into any type of advanced statistics...or um, statistics, and really, did this mostly off the cuff. Don't Neil Greenberg my list.] We will use the rosters to play a one off fantasy match for bragging rights. The actual draft will be tonight on NBC Sports Network at 8pm. [Full coverage information here]

After the jump, the explanation of the selection process, the fantasy scoring criteria, and some breakdowns and observations about the rosters.

First and foremost, it needs to be said that we used the rules that the NHL gives the chosen captains to guide them through the process. That makes it difficult and annoying. Having to get in all the goalies and defensemen early so their feelings don't get hurt or something (there may actually be some kind of logic here, but I doubt it) really puts a crimp in drafting a juggernaut. Since the captains were already selected, Mark and I flipped a coin for the right to choose the captains or to draft first. Being the good sport that I am, I let him call it [Tails which went off as a 3-1 underdog] and he won, picking the Zdeno Chara and Joffrey Lupul team. Already I was stuck with a Ranger, a ballot stuffing outcome and the first pick. 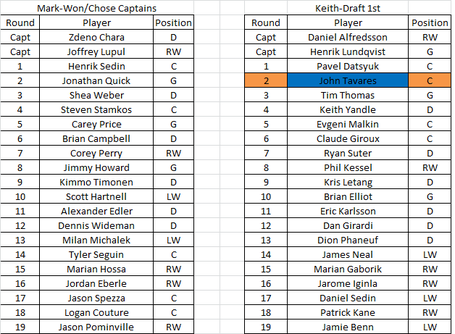 The fantasy criteria to determine the winner will be goals, assists, points, +/-, time on ice, goals against, save percentage, saves, and "win".

In comments, please feel free to evaluate the drafts as both Mark and I enjoy criticism and are really pretty comfortable with shame. Vote and make guesses on MVP or make your own fantasy roster to compete with us. Winners will receive valuable prizes like verbal praise, recs and enhanced self-esteem.

It's obviously hard to bash two teams made of all-stars, and when these two teams hit the ice, anything can happen. I found it interesting that both teams drafted D-men and Goalies so early. I know that Goalies must be done before Round 10 and Defenseman before Round 15, but both teams chose to forgo choosing 7 stud forwards before wasting 8 straight midround picks on their goalies and d.

It was also interesting that with only one defenseman left Keith didn't just wait until Pick 15 to welcome the ever popular Dion Phaneuf to his team and embrace the chance to snatch up Tyler Seguin, a guy that I think will have a big offensive impact in the upcoming game.

As for the actual teams, both teams have a decent mix of all-star veterans and first-timers. Keith's choice of grabbing 4 stud centers early gives him the advantage on the front line. I also think that his goaltending tandem of Lundqvist, Thomas, and Elliott slightly tip the goalie advantage his way.

With that said, Mark's early selection of known puck-moving defenseman give him the advantage on the blueline. The fact that the game will be wide open should lead to a lot of home run passes, and there may be a lot of assists coming from those players.

On paper I would have to give the edge to Keith's team, but in an all-star game all bets are off.

Enjoy all-star weekend, and as always, in John we trust. Good luck JT91!