Yesterday LHH reader Timtropolis brought up an interesting schedule quirk: Three consecutive games with the Devils in March. A home-and-home-and-home from Sunday, March 4, to Saturday, March 10.

I know I've seen this happen in the NHL before, and each time one of the two combatants has had another opponent mixed in. That's true of the Devils, who interrupt their three-game Islanders set with a visit by the Rangers March 6. On that note, the Islanders face the Rangers the day after the last Devils game in that set. Ah, the possibilities a three-team metro market yields.

In other scheduling oddities, the Islanders have nine games in October, but only six opponents. They face both Florida teams twice, as well as the home-and-home grudge match with the Penguins Oct. 25-27.

Micheal Haley Gets Another Tattoo 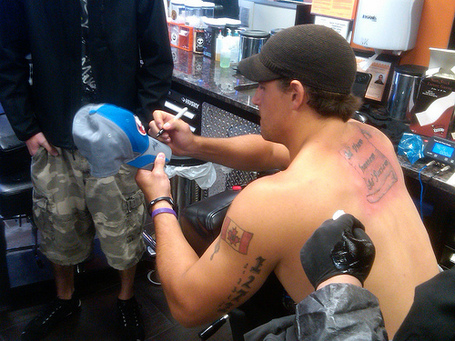 There is no truth to the rumor he tattooed his knuckle with "Avery's cheek was here."

More on the tattoo thing at Newsday.

Question of the Day

I'm looking at the schedule and don't see a lot of opportunities for good road trips on my end. But we'll see. My last in-person game was last December when the Flyers visited the Coliseum in the midst of the Islanders' lengthy struggles. (The losing streak was over, but the slump was not.) WebBard and I met up with Doug (LHH friend IslesOfficial) and had a good time, but the atmosphere was depressed amid the continuing slump.

What a difference a couple of months made.

My question to you: What was your last Islanders game? Was it when things were dour, or after things started to turn around?

Bonus Question: Have any non-Coliseum Islanders games/road trips in your sights for this season?