I won't jump off a bridge about the none more black third jersey concept until something's released from the team (then I'll jump), but ... well if you were told you had to accept an Islanders third jersey, what would you prefer it look like?

Andrew Facini of Extrasolar Design offered up this look pictured on the right. In a brief discussion, neither of us are particular advocates of the unmatching sleeves look, but this one makes up for my discomfort on that front by going all out in passion and pride for the Island.

Got any other ideas, photoshopped or otherwise?

And while we're mulling alternate concepts, I received an interesting mock-up for a Suffolk Islanders color scheme, imagining the team moving to Suffolk and switching to new County colors. That one's mixed in with the links below. 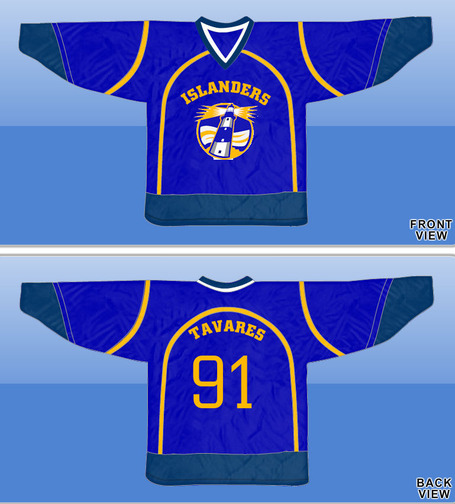 That one, from Xavier Rodriguez of Elmont, seeks to leverage Suffolk both with the colors and the old lighthouse logo referencing Montauk.

All of the above should be enough to stir passions for one day, but here's other stuff going on:

Finally, I understand fantasy hockey is gearing up. I've had a chance to peruse Dobber Hockey's preview and can vouch it's good as you'd expect. Among sleepers they peg Frans NIelsen to increase his production for the sixth consecutive season. Among possible PIM collectors they note Travis Hamonic, whose 102 PIM in 62 games was a good rate, albeit Penguins-aided.

Within the SBN family, I also hear good things about Fantasy Hockey Scouts guide, and of course their site is updated frequently with good posts. I'm not a fantasy player, so I can't exactly parse sources on who to grab for the third line in your Western Conference keeper league. But what I find is most of these outlets are still just talking hockey with a fantasy label on it, and the reasoning from both Dobber and FHS is usually solid.