Did the Isles Get Singled Out Post Fight Night?

One of the themes after the Friday Night Fights with the Penguins was that the Islanders were being unfairly picked on by the NHL. Refs seemed to be calling everything on the Islanders, and looking for reasons to toss Zenon Konopka along with the other more "goonish" players on the team. While the Isles finished the season leading the league in PIM, this was inflated by them leading the league in Game Misconducts. They also led the league in Misconducts, their 31 total being almost a dozen more the next closest team.

But when taken as a whole the Islanders PIM per game stayed pretty consistent. With 68 total fights last year they were 4th in the league, while Konopka was second in the league with 25 total fights. So for roughly half the games this season the Islanders PIM include at least 5 minutes for a fight. Which helps to explain how the Islanders averaged 18.5 PIM a game. Beyond upgrading the 4th line center position, the Isles might be looking to cut back on penalties as Marty Reasoner had 22 PIM, while Konopka led the league in PIM.

So I graphed out the Islanders PIM game by game last season. I started with the first 50 games of the year, and compared that to the final 32. As luck would have it, game 51 was the Rick DiPietro and Brent Johnson fight which started everything. The graph is after the jump... 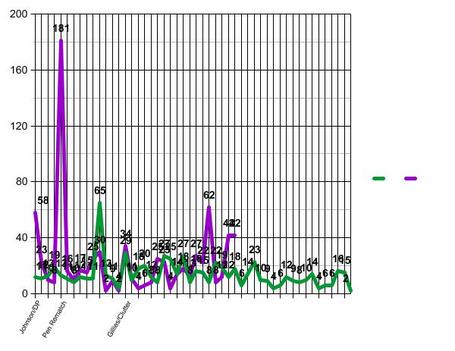 Looking at this, quite simply the Islanders were getting penalized nearly all season long. Now if the league was out to get them anymore after Mario started crying, you really can't tell. If the league for whatever reason targets the Islanders more throughout the whole season in comparison to other teams you might have a debate.

Behind Konopka, the two prime targets for PIMs were Trevor Gillies and Micheal Haley. Gillies in 39 games managed 165 PIM for 4.2 PIM a game. Last season he only averaged 3:04 minutes of ice time a game. Haley meanwhile had 85 PIM in 27 games for an average of 3.14 PIM a game. While both of these guys are doing what they are brought here for, both PIM averages are troublesome. Meanwhile Matt Martin (147 PIM) and Travis Hamonic (103 PIM) were the only other Islanders to crack 100 PIM. But each player can be excused, considering it was there rookie seasons. Hopefully with more playing time under their belt they won't have to rely on treading the line between legal and illegal play.

This was another situation where as fans it feels and looks one way. But while the league might have come down harder on the Islanders (cough not controlling your players Godard cough) for fight night, the refs didn't seem out to get the Islanders anymore then they had previously. The Islanders basically had a handful of players who really drove their PIM up over the course of the season. While it was fun watching Frans Nilesen and Michael Grabner work their magic on the shorthand, Snow seems to have made the decision to try to cut down on the Penalties.