Talks broke down between #Isles and Christian Ehrhoff; email sent out from #Isles end to other teams

Well, it was a fun 20 hours, Deutschlander. Enjoy the next stop.

The explosion of comments and Twitter traffic by Islanders fans about acquiring the negotiating rights to a pretty good but-not-star NHLer creates one of those reflective moments where you realize just how much (and how many) people care about this team. From California to Sweden to Austria to Long Island and some anonymous Midwest outpost [Lampoon language warning], people are buzzing in late June about a maybe with Christian Ehrhoff.

The blogger/fan in me both looks forward to and fears the time when this team climbs up the standings and draws the casual fans out of the woodwork. On the flipside...wow do people read a whole lot of connotation into just a few words on Twitter. I'm not going into examples other than to say contract negotiations don't happen in an instant unless it's July 1 and you're Tampa Bay.

For now, here's a collection of links, sweet humor and reactions to a surreal trans-Atlantic saga taking place today and, possibly, tomorrow: 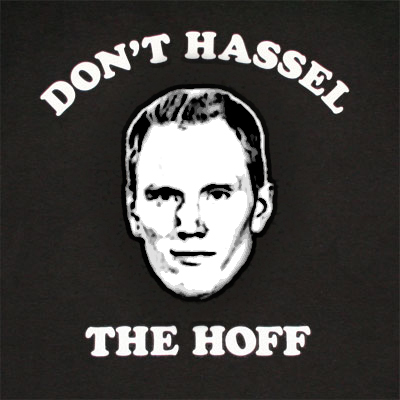 The story as it's known

Garth Snow talked yesterday to agent Rick Curran, who has spoken to Ehrhoff today [$5 please]. This stuff broke in the evening in North America after the Canucks decided they were done and solicited offers for the rights. Snow told Newsday's Katie Strang:

"I'm going to give it my best effort to get it done ... leave no stone unturned."

Newsday's Arthur Staple theorizing why the contract should be front-loaded, due to the next CBA uncertainty. (Question: I can buy a cap rollback, but are people really figuring the owners will get away with a salary rollback? With Fehr at the helm? Salaries have gone up because revenues have gone up; if the owners don't like it, they better learn to share more.)

We had a bunch of comments, and a bunch of good one-liners, from Grabner on the Autobahn to Wagner playing at the Coliseum when the Islanders put out an all-German-speaking unit. Such as this response from Afrosupreme:

ChrisBottaNHL
One would think the #Isles are putting ex-Canuck @grabs40 on a plane from Austria to Germany in a few hours.

A Plane?
That would take too long. He’s rollerblading on the Autobahn as we speak.
by afrosupreme on June 28

Yes, Michael Grabner has done his part, so leave him alone:

@grabs40
For all the people asking- I already talked to ehrhoff..told him its great on long island,tried my best...rest is up to him people..

And the snark has been fully engaged:

@HockeyRanter
Ehrhoff may actually enjoy playing somewhere that doesn’t burn their own city down every decade or so.

Why the 'Nucks had to draw a line in the sand:

@VancityBuzz Karm
If Ehrhoff won't take Bieksa Money, let him go. We have Edler to re-sign next year

This is just one branch of the Isles' offseason plan:

@TheFourthPeriod David Pagnotta
I do, and too early to tell on Ehrhoff RT @Michael_Rotondo Do you think the Isles will try & improve up front? chances of signing Erhoff?

But why would Ehrhoff -- who was negotiating with Vancouver just a few days ago -- suddenly give up his choice of any destination just to go to the Isles?:

@mirtle James Mirtle
Good on Gillis for getting something for Ehrhoff, who is going for a big pay day. Doubt he ends up on Long Island, though.

The answer, of course, is that if he won't sign with Vancouver for some pretty sweet Bieksa money, then he must be looking to truly max out his earnings. And not too many teams are going to be able to do that for him.

But it's hard to know what motivates some players. Ehrhoff, for his part, has already been a victim (I use that term loosely) of the NHL system when San Jose dumped him to make cap room for the Dany Heatley acquisition. So just because he played hardball with Vancouver doesn't mean his values aren't on "winning" -- it could simply mean that he knows situations can change in an instant, and teams are only looking out for your interests up to the point that you are still useful to them.

I stole most of the Twitter quotes from Keith, who is better at keeping up with the Twitters than I am. By all means, post more news and fun stuff in comments here and in the prior two threads.