This is the first of our handful of tardy polls to go up after Game 1 in a series is already complete. (Sorry. I figure this beats spamming the front page with eight polls on Wednesday.) Which brings up the possibility Game 1's result might alter how we would've voted and -- would you believe me if I said Game 1 went about how I expected?

The Ducks are just so incredibly reliant on that top six, and their goaltending in the Hiller Vertigo Years (a book I'd recommend, by the way) is so suspect, it's hard for me to picture them toppling the balanced, steady Predators in a seven-game series without sending Corey Perry careening, Matt Cooke-on-Rick DiPietro-style, into Pekka Rinne. Or without Perry continuing his unbelievable spring. At last, after years of drawing eventual Cup finalists and favorites in the first round, the Predators have finally drawn an opponent they should take.

The above records don't indicate Nashville is the better team (nor do the seeds), but possession stats from the season and the fact Hiller isn't there to be Hiller make me think otherwise. Honestly though, both teams are examples of the strange inconsistency you expect from lower seed playoff teams. Anaheim's Perry-fueled run to the playoffs was something to behold.

Why You Should Visit Battle of California 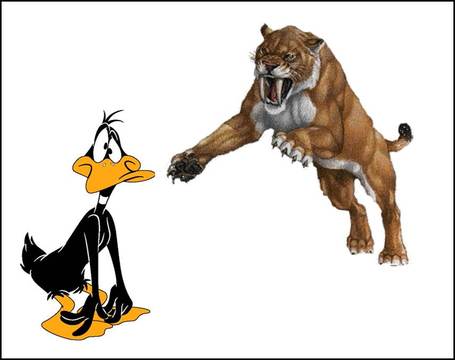 I drew too much for Game One, so today I'm just stealing.

Because of Earl Sleek. Reposted here without any semblance of permission...except thieves' honor, you know?

Heart Says: I could not possibly have less rooting interest in this series. I don't share a lot of Islanders fans' nostalgia for Jason Blake (I appreciate what he did and how, but I also felt both parties got what they needed out of the other). I enjoy the cantankerous nature of Ducks coach Randy Carlyle and folksy GM Bob Murray, but I respect the consistency and no-frills approach of Nashville's Barry Trotz and David Poile. I do think the expansion fanbase of Nashville is long overdue a little playoff success. But then I love when West Coast teams stay in the playoffs, because it means more nights with games from dusk till dawn. So that means I hope for seven games, cleanest team wins, maybe Nashville but really whatever.

Head Says: My head, on the other hand, obviously thinks the Preds have the edge. The Ducks' top line is amazing, and so is Teem Selanne -- and that should be good to win a couple of games -- but I think over seven games Trotz boys will get it done. Finally. Predators in six.