After a quiet game by his standards, Alex Ovechkin had one of those "he can change the game by himself" moments, in OT, to go end-to-end for the game winner that landed him on the night's highlight reels. What happened before then had a decidedly Islanders 2011 feel: They withstood an early barrage of Capitals chances, converted one of a surprising number of Capitals turnovers, and came very, very close to stealing a close game in D.C., despite failing to cash in on any of four powerplay opportunities. And of course, they suffered an injury (Micheal Haley, blocked shot).

The heartbreaker is Nathan Lawson was 48 seconds away from his first NHL shutout. With the goalie pulled, Brooks Laich's goal -- he was a catalyst in the comeback win on Long Island a few nights ago -- erased those shutout dreams and sent it to overtime. Ovechkin's tally 1:55 into OT took the rest of the air out of the balloon.

We've been joking about the "scapwagon" around here, as in who draws the majority of fan ire (rational or otherwise) on any given night -- and who would get it now that Schremp is gone. Cue the MS Paint for last night's in-the-moment recipients: 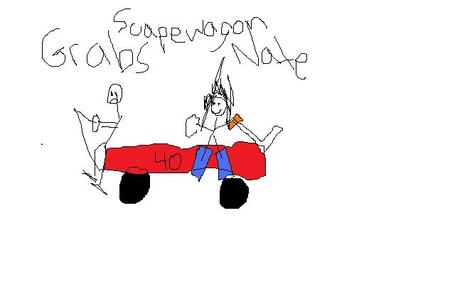 (I think the Grabner one must be a reference to him not being able to get it out on that final shift in regulation -- a mistake, but one that can happen. He didn't take the ideal angle on getting to it and fishing it off the boards. And Lawson because...he shouldn't have come so close to a shutout and then had the nerve to give up a winning goal to Ovechkin. Travis Hamonic escaped the wagon despite his getting stuck deep in the Caps zone just before Ovechkin got the puck.)

"It's extremely disappointing to lose it in the last 47 seconds," Lawson said. "We battled so hard for 59 minutes. To come away with just one point is unacceptable."

...but really it could have been worse, and the game could have turned against the Isles earlier. It turned on some missed opportunities, but the Islanders were a little fortunate to be so close to a 1-0 win.

I saw some comments that the Islanders need to learn how to "close out" games like this, but to my eyes the reality is: 1) They have closed games like this -- during their winning run, and 2) When you are the undermanned team, you are at risk of losing at any point during the game. You spend your 60 minutes trying to dodge that likelihood. If you are fortunate enough to be in the lead late in a close game, that does not change the fact that you are always at risk of conceding a goal, because it's hockey -- and worse, because you happen to be the weaker team.

We do this again, back-to-back, at home Tuesday Wednesday night [ed. Sorry, having a devil of a time remembering what day it is lately] to the Wild. The Wild are wild I tell you! Just wild!