For the seventh time this season the Islanders gave up a goal in the first five minutes, but this time they seemed doubly focused to not let the fluke early deficit keep them down, putting in a strong effort for as close to 60 minutes as you'll get against NHL competition.

It wasn't until the second period that their efforts paid off in an equalizer by Andrew MacDonald, and the third period when John Tavares got the game-winner on an unbelievable solo rush down the right wing and through phone booth space behind the Calgary Flames defense but in front of Miikka Kiprusoff.

Tavares, who had an outstanding night, was key to both goals. Brian Rolston iced it with an empty net goal. The Isles entered the game 2-14-2 when conceding a game's first goal. The win makes that 3-14-2 and oddly, the Isles are now 13-1-7 in last 21 home games versus Western Conference teams.

Flames Goal: A fluke-ish goal followed a Mike Mottau failure to hold the point, with the eventual pass to the Isles net going in off Tim Jackman's foot (after taking a brief detour to Andrew MacDonald's foot). That seemed to steel the Isles resolve to not let a fluke get them down early, as they actually mounted several shifts of pressure by multiple lines and aided by Mark Streit forays down low. The best chance of the sequence may have been a Streit wraparound, though one wonders if it would've resulted in a goal had he fed Matt Martin just above the goal crease.

A Minor Brouhaha: Things got interesting after Lee Stempniak planted a shoulder into Kyle Okposo's head in that gray period after Okposo released a pass and turned to follow the play. Matt Moulson responded by jumping Stempniak (in an ugly tussle of mostly peaceful goal scorers). Chris Butler appeared to jump as a third man in and for a few seconds it looked like a line brawl was in order before most of the players on the ice realized they're pacifists. Only a minor was issued, to Moulson, and the Isles had to kill that powerplay at the second period's opening.

Not long after that kill, Tavares was out for an offensive zone draw which he won, took to the corner and behind the net, and swept the puck back to P.A. Parenteau while Tavares and Brian Rolston drew attention from the Flames. Parenteau made like Tavares with a pass from the corner to a creeping Andrew MacDonald, who tied it up on a one-timer. At the intermission MacDonald explained his pinch into the slot: "I noticed the Flames forwards were puck-watching."

Or Johnny T-watching, which the Flames D pair of Jay Bouwmeester and Butler (okay, mostly just Butler) would do again at the game's pivotal moment:

Line Watching: The new lines from Jack Capuano obviously produced no more goals than normal -- two goals is about their season average anyway. But they did look promising enough to see more. Kyle Okposo was mostly effective on that top line, and Parnenteau lent his possession skills to the Frans Nielsen line while Brian Rolston fired from anywhere, as he is wont to do. Josh Bailey and Matt Martin continued their recent play, with Michael Grabner adding a couple of speed bursts to that line.

The Islanders outshot the Flames 34-30 on the game, though it seemed the Isles held the flow of play for most of the night. Good forechecks, smart pucks in deep, just a few dangerous mistakes (including MacDonald, pinching with the lead in the third period, making a suicide pass up through the slot from behind the Flames net. Thankfully it was Tim Jackman on the ensuing 2-on-1).

Evgeni Nabokov held the fort on that rush and through most of the night -- Jackman's foot goal being the only one to get through. At the other end Kiprusoff made several outstanding saves and smart smothers to keep the Islanders from ever getting a more comfortable lead.

The Flames' best chance to even it up came with a late powerplay on a Michael Grabner high stick that, upon further review, was the right call (it was just well before the whistle, so the MSG crew had to search to find it). The Isles bent but didn't break there, blocking a few shots and dodging a few close calls.

It was another nailbiter, the fashion in which this team both wins and loses games, but it'll do for busting the latest slump.

MSG Fun of the Night

With a few minutes left and the Islanders up 2-1, the MSG text graphic briefly listed "EMPTY NET" underneath the Islanders side of the scoreboard: 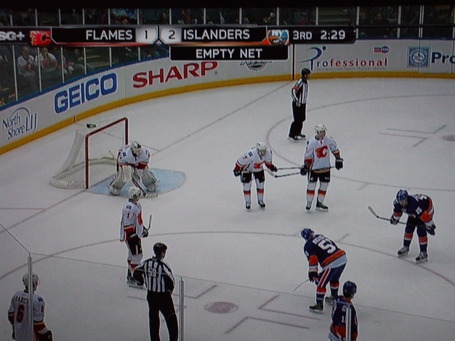 Must be set automatically with 2:30 left.

[*image capture and caption from mikb]

Butchism Fun of the Night

In goal for the Flames and keeping them in the game with several good saves: "Kryptosoft."

Skeeterman on the Grabner high-stick, which none of us could locate at first:

Return of the Night

Jackman got the goal, but it was Blake Comeau our COZO-gazing eyes were watching. He kept the COZO's to a minimum -- I swear his former teammates saw them coming and stopped him in orbit. He attempted one late in the game and stopped at the goal line, putting a decent shot on.

Early on, he attempted to lay out Matt Moulson but took the worst of the collision by far. [video here]

In 11:35, Comeau was credited with two shots, one missed shot, one hit and one giveaway.

As #1 star John Tavares skated out through the Islanders' victory line and reached for the low fives, his teammates pulled away and gave him the silent treatment [rough video]. The young folk may have a name for this move, but I last saw it when Albert Pujols hit the last of however many home runs he hit in the World Series game earlier this year.