Tweet Share
 Tweet Share on Twitter Share Share on Facebook Pin Pinterest 12 Comments
On Saturday night, the Islanders, Rangers and Sharks all wrapped up their 30th games of the season. The Islanders started their third 10 with 10 of the possible first 12 points before deciding that was enough and dropping 3 straight, salvaging the set with the Home Run Derby win over the Wild. Following up on the look at the first 20, here's games 21-30. Standings after 30 GP 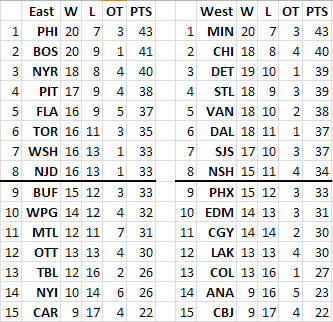 After 30 GP, the Islandets sit in 14th in the East, 7 points back of 8th place New Jersey. It would take another 4 game win streak to get to .500. At 30 GP, Ottawa was at .500 and still in 12th place, 3 points out, so getting to 500 is just the first step towards getting into the hunt. Now to look at more than W's and L's... after 30, the NYI are creditied with 69 goals, 29th of 30 teams, ahead of only Los Angeles. 97 pucks have found their way into the gaping maw behind Al Montoya (Mark Streit has assists on 90 of them). Four teams have allowed more in. Our -28 goal differential is bad enough to be the worst in the league, edging out Carolina and Columbus who tallied -27 each. One bright spot is in PIM. The 312 the Islanders have taken (either on their own or via the creative imaginations of the zebras) is the 5th fewest. The wily Coyotes have only been called for 253 minutes, while the Flyers have racked up 480. Special teams haven't been all that special. The PP is just under the NHL average of 17%, checking in at 16.2%. The PK is just below the league average (83% for those who don't want to do the math) with 81%. The Special Teams Index works out to 97.1%. Vancouver leads that at 111.4% while Columbus brings up the rear at 89.6%. When it comes to hitting, after Matt Martin, we are a bunch of lightweights registering 601 hits, or 20 per game. Dallas leads with 864 (nearly 29 per game), while the Sharks seem relatively toothless with only 507 (almost 17 per game). Stats through 30 GP 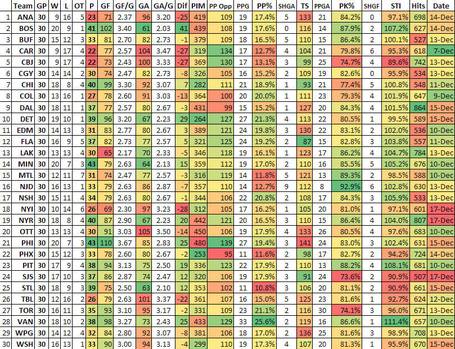 The Islanders 5-3-2 mark was good enough (or not good enough depending on your point of view) for a 6th place tie in the East. We kept even with the Panthers and lost ground to the Rangers, Jets, Penguins, Bruins and Flyers. We picked up 1 point on Toronto, 2 on New Jersey and Montreal, 3 on Ottawa and Buffalo, 4 on Washington, 5 on Carolina and 6 on Tampa Bay. Standings for games 21-30 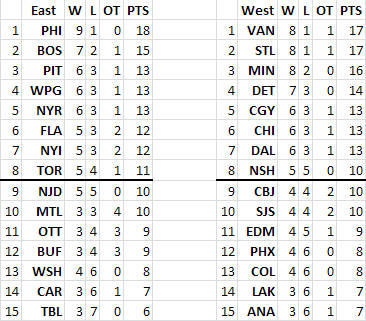 Moving on to the stats, the Islanders got 31 and gave up 32. The 31 was better than the league average of 29. The 32 was below the league average. The -1 differential rested snugly in the middle, between Vancouver's +23 and Anaheim's -17. As with the overall picture, the 92 PIM incurred was amongst the fewest in the league. Montreal was assessed 74 PIM, and those common street thugs in Winnipeg amassed 203, which averages out to over a period a game for 10 games. The 38 PP chances was slightly above league average (36). The conversion rate, 18.4%, also slides in over the league average of 16.4%. The PK also finished just above average. The 33 times short-handed was better than the average (37) while the defense rate, 84.8%, was just over league average (83.8%). The STI came out to 103.7%, well behind Minnesota's 120.9% and way ahead of the 73.6% registered by San Jose. For hitting, 186 was well below the league average (218). Detroit was the softest at 158, while the Kings made up for their lack of goal scoring with a crunching 292. Stats from Games 21-30 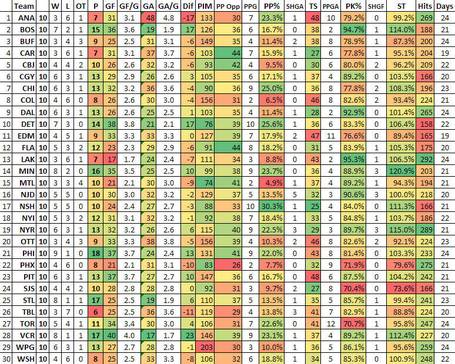 No NHL team would turn down a 5-3-2 stretch. If a team went 5-3-2 eight times, they'd be sitting at 96 points with 2 games to play, wondering who their first round opponent would be. But a 5-3-2 that follows a 2-6-2 and 3-5-2 is only a first baby step back towards relevance. Going 5-3-2 five more times means only 86 points for this team, with 2 games to play, and wondering what kind of tee times are available for the second week of April. In the land of NHL Welfare, making up ground is difficult. Being at .500 means not being in the playoffs, and the Islanders will need to go 6-2-2 in the next 10 (or 7-3-1) just to do that. The next 10 features 4 chances out of the gate to make up ground on the teams in front, with games at Winnipeg and the Rangers, followed by hosting Toronto and going right back to the place where Godzilla had her babies, then hosting Calgary and Edmonton. The new year has us visit Carolina, then out west to see Anaheim and Phoenix before returning home to face Detroit. Is there a 6-2-2 in there? Winnipeg, Toronto, Calgary, Edmonton, Carolina and Anaheim are all beatable. Failure to pick up those wins means having to do better than 0-2-2 against the Rangers (twice), Phoenix and Detroit. I set up a Google Doc of the sheet I use. It has only the values and very little color coding. The tabs themselves are read-only, but you should be able to copy the data into the spreadsheet app of your choice. Thanks to the mystical cabal that generates the NHL schedule, teams will hit game 40 anywhere between December 31 and January 12. Calgary plays 10 games in 19 days while Pittsburgh gets a leisurely 28 days to play the same amount, and the Bruins get a vacation like 29 days to complete 10 games. The Islanders get this 10 done in the league average 24 days..