Share All sharing options for: Recap: Penguins 6 Islanders 3, always something as Hamonic ejected on bogus call

Well, things started off on the right foot. The Islanders got off to the early lead they'd like to see, they were physical, skating and Al Montoya was looking good in the net. They were getting calls and were working hard...what could possibly go wrong? Well, their number one defenceman (arguably) got ejected on a very bad elbowing call.

Hamonic was on the ice to kill a Milan Jurcina penalty and went out to pressure Brooks Orpik on the point. Orpik dumped the puck in, turned and put his back to the boards. As Hamonic skated by, he gave him a bit of the shoulder and forearm and Orpik had put his arms up to protect himself. The recoil of the collision snapped his own stick (which was obviously high) into his head...he made himself bleed his own blood, and Hamonic was assessed a five minute major and game misconduct...for elbowing?!?!

Officials have a difficult job, the game happens so fast, blah blah blah, the NHL has mechanisms available that could eliminate any error in situations like this. They use instant replay and video constantly. In a case where there is going to be a game misconduct they should be implementing a video review immediately or at least a coaches challenge to make sure they got it right. It's unfortunate when officiating effects the outcome of games, it's unconscionable when it happens more than once. They have to make sure they get these right. In this case, they took out the Islanders best shut down option for over half a game and the dropoff in the Islanders play was noticeable (which is scary when you're talking about losing one player). They they went two men down, didn't score for the remainder and gave up three more.

Bad referee...no donut. Video of the hit and game highlights and commentary after the jump.

Putting the bad call aside, the Islanders got off the the start they wanted, gaining a 2-0 lead over Marc Andre Fleury early in the first on goals by David Ullstrom (snipe/wrist/high glove) and Milan Jurcina (slap/screen/glove). But the Penguins would answer on goals by Steve Sullivan (Streit flub/two on one/tap in) and James Neal. Neal's goal came off an apparent error by Hamonic where he was heading behind the net on Al Montoya's right and reversed the puck right to a Penguin. Howie Rose and Butch Goring speculated that perhaps a Penguin player called for the puck/reversal (shenanigans and trickery). The puck ended up on Evgeni Malkin's stick and he fed Neal who was all alone in front of the net.

Kyle Okposo and the rest of the FNGuys had a strong game again and Okposo in particular got fans excited with his wicked wrist shot over Fleury's glove that gave the Isles the last lead they'd have on the night. Let's hope that shoulder is where it's supposed to be and we ee some more of that.

Beyond that, the rest of the game was pretty ugly after Hamonic was ejected. The Penguins didn't score on the 5 on 3, but they got the equalizer during the ensuing major, the Isles were forced to play Reese (19:27), Mottau (16:00), Jurcina (22:37) and Staios (19:51) and Streit (27:20). Streit looked bad for much of the night and was committing errors we're not used to seeing out of him...probably a symptom of the excessive ice time. But the rest were given ice time beyond their pay grade. You can't win too many games like that.

The Isles had their opportunities to the tune of seven power plays on the night (1 of 7) that they could've capitalized on, but the power play looked disorganized and fire drill-ish complete with wide shots and bad zone entries...they actually generated more chances during Hamonic's major with Okposo, Grabner and Bailey generating excellent chances with all the extra ice.

Also, Matt Cooke scored just to twist the dagger...and it was a nice goal.

Line of the night from Howie Rose on Matt Cooke:

He's like a wallflower now...just another passive hippie out there.

He would later slash Mark Streit. 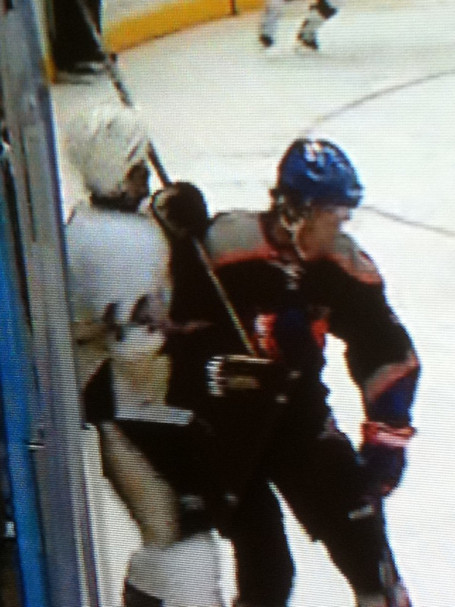