After a player goes 12 games without registering a single point, there are no excuses. Even a guy playing on a broken leg is able to pick up a secondary assist on a goal scored by his team somewhere along the road. And 0 points after 12 games is exactly where Blake Comeau finds himself right now, with 1/6 of the 2011-12 season now in the books.

It's hard to pinpoint how a player goes 12 games without scoring a point. A lot of people who have been critical about Comeau's play in the past have been even more critical this season. The thing with Blake Comeau is, he's always played the same way. He's never been a guy who drives the net. He has always taken questionable shots. And up until this season, that play hasn't stopped Comeau from producing at the NHL level.

In Blake's first 4 seasons in the NHL his point production has increased by at least 10 points every season (15, 25, 35, 46). In 2009 he endured a lengthy benching by Scott Gordon and still finished the season with a career high 18 goals. That summer, before the 2010-11 season started I had a chance to talk to Comeau, and we talked about his future with the Islanders (and the picture below at least proves we were in the same place at the same time).

He was very excited for the upcoming season and had been rehabbing hard to get back into shape after a broken foot ended his 2009-10 season (and a chance to reach the 20 goal plateau). He told me he knew what he needed to do to be more consistent and was excited to be part of a group of guys that he thought would bring the Islanders back to the playoffs. I've spoken with professional athletes before, Blake was one of the more genuine conversations I have had with one.

That following season Comeau scored a career high 24 goals and 46 points. He had proven that he continued to progress at the NHL level. He proved that his 18 goal output the year before was no fluke. But throughout the season and then the offseason, he watched other guys in the group he was so excited to be part of, sign new long term contracts. Blake pretty much had to hold his breath for a one-year deal. 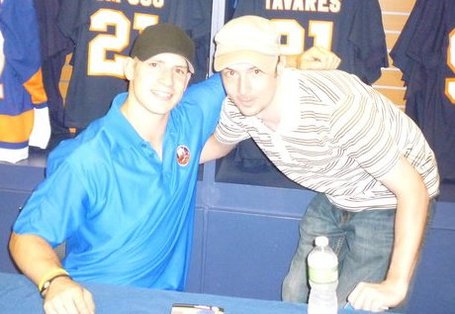 There's no denying the talent of Michael Grabner or the fine season P.A. Parenteau had, but neither had even sniffed double digit goals in the NHL before last season. Comeau was busy backing up an 18 goal season with an even better one. Yet the Islanders didn't even allow Parenteau to reach free agency before giving him an extension, and signed Grabner to a long term deal shortly after the season ended. Comeau, on the other hand, wasn't a priority of the team and had to wait until the next to last minute to get a one year deal before his arbitration case.

When the preseason came, all of the Islanders A Squad traveled together, practiced together, and played a handful of games together Comeau, despite being the teams 4th-highest goal scorer the season before, was relegated to the B squad. Not only was Comeau not playing with the majority of the guys who would start the season on the Islanders roster, but he was also now spending the majority of the preseason not on the ice with the group of guys just one year prior he had dubbed the future of the Islanders, a group he thought he was part of.

In 2010-11, Comeau scored 5 power play goals, just behind the Islanders top line of John Tavares, Matt Moulson, and Parenteau, yet he wasn't in the Islanders power play plans for 2011-12. In 2010-11, Comeau was 2nd on the Isles in penalty killing TOI, just behind shorthanded wizard Frans Nielsen, yet Blake found himself relegated to the teams 4th PK unit to start the season behind Marty Reasoner, Jay Pandolfo, Nielsen, Grabner, Josh Bailey, and Matt Martin.

When it was time for coach Jack Capuano to send a message about poor play and scratch someone for the first time in 2011, Comeau was the man who found himself in the pressbox for 2 games. Besides goon Trevor Gillies, Comeau has been the only healthyforward scratch Capuano has made this season. And despite 14 games and 0 goals from Kyle Okposo and 14 games and only 1 goal from Bailey, Comeau is the odds on favorite to be a healthy scratch again when Nino Niederreiter makes his season debut against the Rangers, a team Comeau has historically lit up.

I don't see what goes on in the clubhouse, I'm not there for practices, and I'm not a hockey expert when it comes to X's and O's. But even if there are issues on those fronts, it's hard to deny that Blake Comeau has been shown a lack of respect by Islanders management since his 24 goal 2010-11 campaign ended. It's hard to not wonder if Comeau may feel a little rejected by the only NHL team he has ever known. Even with million dollar paychecks and a dream job of playing professional hockey, players are also human, and most humans like to feel appreciated.

There are no excuses for going pointless in the first 12 games of the season, but sometimes if you look a little closer, maybe it's a little bit easier to understand.