I'm pretty sure this went under the radar during the offseason, but I, Chris McNally, volunteered to keep track of scoring chances during Islanders games for the 2011-12 season. The scoring chance project was created by Derek Zona of The Copper and Blue in an effort to enhance the Corsi stat and show just how well a player is utilizing his puck posession. There are at least 16 teams who are participating in this project and its possible a few more have jumped on board since.

A scoring chance is defined as a clear play directed toward the opposing net from a dangerous scoring area - loosely defined as the top of the circle in and inside the faceoff dots (nicknamed the Home Plate, detailed at the below), though sometimes slightly more generous than that depending on the amount of immediately-preceding puck movement or screens in front of the net 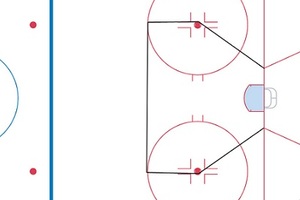 I was going to try and get an update out after every game but sometimes it'll take me a couple days to compile the data, so instead I'll update it once a week. I'll try picking an Islanders off day so it doesn't get lost in the excitement of the pregame and in-game threads. Without further adieu, here's our first Islanders Scoring Chance update of the 2011-12 season

The Islanders opened the season at home against the Florida Panthers and as we all know, they looked flat. Well the numbers suggest the same exact thing. Here are the scoring chances, the type of shot, the end result of the shot, and who was on the ice at the time of the chance.

1. Florida had 10 of the first 12 scoring chances in the game, and one of the Isles' chances didn't even hit the net.

2. The Islanders, down 2-0, managed to generate 0 scoring chances in the last 15 minutes of the game.

With numbers like that, it really isn't a surprise that the Islanders lost the game, let alone got shutout. Here are the individual numbers for the game. Remember, the bold number after TOI is the number of chances a player was on the ice for during even strength, power play, and shorthanded, while the second number is the number of chances he was on the ice against. These numbers were supposed to be in color, hopefully I can have it that way for the next update.

The surprising numbers that stand out are that the players that had the most scoring chances against them were the top defensive pair of Mark Streit and Steve Staios and the top line forward pair of John Tavares and P.A. Parenteau. On the flip side though, they were also the players who were on the ice for the most scoring chances created, leaving Streit, Tavares, and Parenteau at only -1 apiece for the game. The only player with a positive number for the game was newcomer Brian Rolston with a +2. The fourth line were all -2 or worse for the game, showing that maybe their good play wasn't AS good as we first thought. The worst numbers for the game, surprise surprise, were the defensive pairing of Mark Eaton and Mike Mottau, who were on the ice for 5 and 4 scoring chances against, respectively, and not a single scoring chance created. All around though, the numbers were not good for our beloved Islanders.

I do have some bad news. My DVR'ed copy of the Isles/Wild game crapped out on me after 16 minutes and I only got to record 1 scoring chance (another P.A. shot wide). I'm trying to find either the data for the game or another copy (my dad may possibly have one). I'd like to get these numbers somehow because a season full of statistics minus one game is like a 792 card set of Topps baseball cards minus one card (probably Checklist 133-265). Either way, I'll be back next week with the update from the Lightning and Rangers games.